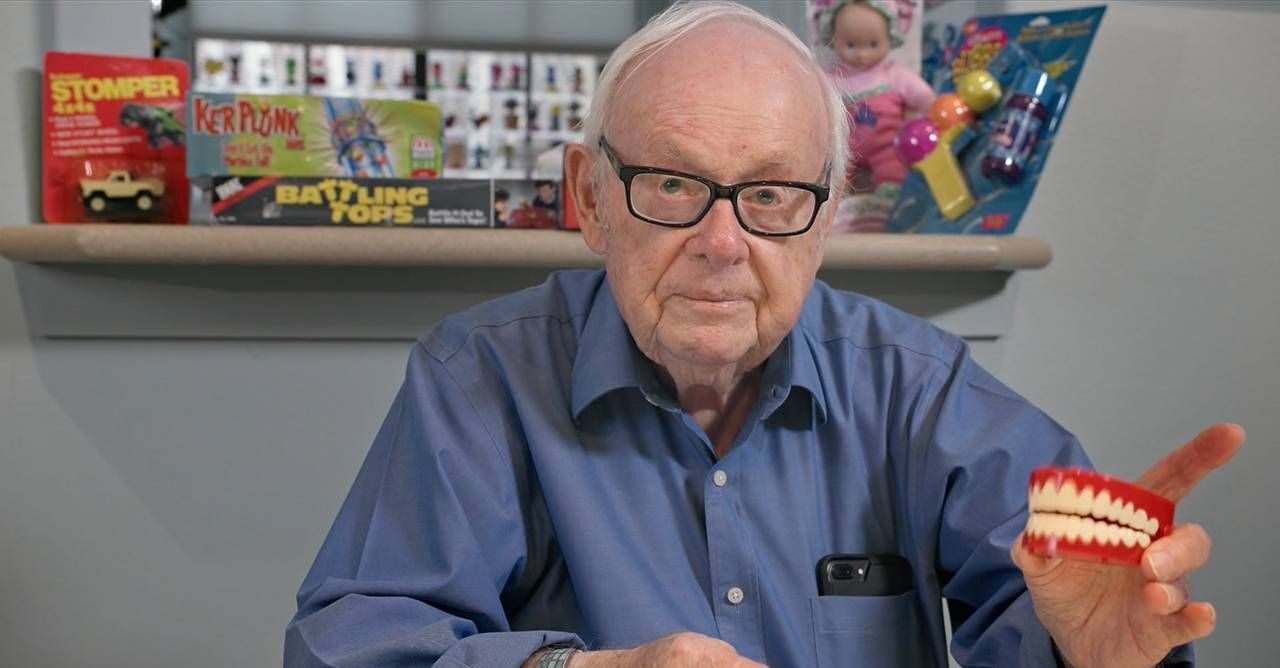 By Richard Harris for Next Avenue

Eddy Goldfarb can recall the precise moment that would shape the rest of his life. But you'll forgive him if he's unsure whether he was five or six at the time.

"My father brought home a man and introduced him as an inventor. I learned what an inventor was and I knew at a very early age that I wanted to be an independent inventor, that I would go from company to company, idea to idea," said Goldfarb.

And so he did. For more than 70 years, the light bulb has kept blinking above Goldfarb's head, over and over again. He designed his first toys on a WWII submarine and went on to invent more than 800 toys and games, his creative niche of choice.

Goldfarb, who lives in California, patented several hundred of them and along the way, created indelible memories for generations. Among his creations: Chattering Teeth, KerPlunk, Vac-U-Form and what he calls his most successful invention, Stompers, the four-wheel-drive battery-powered trucks which he proudly says "are still being collected by grown men."

To talk with Goldfarb and see him over Zoom, you'd suspect he'd also invented the fountain of youth since he is, impossibly, seven months shy of his 100th birthday. And while Goldfarb may not be a household name like others in the toy business — Herman Fisher of Fisher-Price, game manufacturers Milton Bradley and George Parker of Parker Brothers, Jim Henson of Muppets fame or Toys 'R Us founder Charles Lazarus — don't be fooled. Goldfarb is part of a very exclusive club. Each has been inducted in the Toy Industry Hall of Fame.

Of all the toys Goldfarb created, one of them — the bubble gun — perhaps best explains what it takes to be a prolific and successful inventor — a deep reservoir of creativity, persistence and a thick skin to insulate yourself from constant rejection.

"I made this really nice bubble gun that worked beautifully, showed it to company after company and everyone turned it down," said Goldfarb. "They asked, 'Why is anyone going to spend four dollars for a bubble gun when they can buy a bottle of bubbles with a plastic wand for thirty-nine cents and they can blow their own?'"

Ultimately, a toy executive prodded by his girlfriend decided to take a chance, and bought the bubble gun. And it took off.

"It turned out to be a fantastic item. At least ten companies are making different kinds of bubble guns today," Goldfarb said with the satisfaction that only comes with trusting your gut.

With a boyish twinkle, Goldfarb declares, "This is the bubble gun in action!" as he shoots a stream of bubbles in the opening sequence of the documentary short "Eddy's World," directed by Eddy's daughter, Academy Award-nominated filmmaker Lyn Goldfarb. Watch the full film below (YouTube) or on The New Yorker Documentary Series site.

As kids, Lyn and her two siblings (sister Fran and brother Martin, who now heads up the toy business his dad founded) were something of a personal focus group for her dad, playing with prototypes of toys he had invented. Said Lyn, "My dad would bring home what he said were some of the most expensive toys for us to try out before they were manufactured and we were sworn to secrecy, not allowed to talk about them with our friends."

For Lyn Goldfarb, what began as a family oral history project morphed into a  documentary short not simply about a toymaker who happens to be her dad, but something much bigger. "I always thought I was making a film about aging," she said. And the nearly 2,000 comments about the film on YouTube (along with more than 700,000 views) would seem to confirm that's exactly what she did:

Like anyone who appears at least 20 years younger than his chronological age, Eddy Goldfarb defies so many of the stereotypes people associate with aging, especially as a soon-to-be centenarian.

"I think a big part of living longer, certainly, is being born with the right genes," he said. (Goldfarb has a younger sister who is 97.)  And he notes it doesn't hurt that he's been moderately active over the years as a self-described "lousy tennis player."

But more than any anything, Goldfarb said, the key to longevity is "to have an idea and figure out how the hell am I going to solve it. Seeing something go from nothing to something you can hold in your hands is exciting.  t doesn't have to be a toy or invention. It could be a woman knitting a wool cap who also starts with nothing and ends up with something on her kid's head. I think being creative is very, very important," he said.

CNN's chief medical correspondent and brain surgeon Dr. Sanjay Gupta told me in a recent Next Avenue interview there's evidence something else is critical for brain health as we age: "Anything that can create those long lasting new neural pathways in the brain by just getting outside your comfort zone, learning something new, doing something that scares you, whatever it may be, whatever gives you joy now and helps protect your brain later."

Thirteen years ago, when Goldfarb was 86, a neighborhood newspaper ran a contest for 100-word stories. "I lost, but kept writing" because, he said, he enjoys it. To date, he has written more than 150 stories, including one about the day he met his wife Anita to whom he was married nearly 65 years.

HOW I MET YOUR MOTHER
Hank and I went to this dance. I was sitting when they walked by. I noticed her tush, and then her face, it was wow. Not just because she was beautiful, but behind those blue eyes, there was so much more. The first things I asked were, 'Was she single and did she have a job?' Kidding, those are TV lines. We danced and when I held her and she wrinkled her nose, that was it. I didn't want to rush her or look like a weirdo, so I waited till the next day to ask her to marry me.

Nine months later, they were married. Anita died in 2013.

Goldfarb writes on a computer and has always embraced new technology, so it was only appropriate he appeared on our Zoom call even before I checked in. He asks Siri for the weather forecast on his smart phone, collects solar-powered dancing plastic figures and knows his way around a 3-D printer, where he still makes lithophanes of family photos.

As soon as I posed my final question — How are you going to celebrate your big birthday in September? — it was as though Goldfarb wanted to send a friendly squirt my way with one of the tiny water guns he invented as a cereal box premium years ago.

Daughter Lyn knows the drill all too well: "We've haven't been making a big deal about his birthdays for a while."

As annoying as it may be to some, Goldfarb said, another ingredient in his recipe for longevity is his lifelong optimism. Goldfarb knows there is much work left to do in his Southern California garage workshop: more toys to invent, more 100-word stories to write and, especially in these dark times, finding a way to keep our spirits up.

"During this terrible period between the virus and our politics, I think we just have to look forward to the light at the end of the tunnel and keep walking toward it," he said.

Richard Harris is a freelance writer, consultant to the nonprofit iCivics and former senior producer of ABC News NIGHTLINE with Ted Koppel.