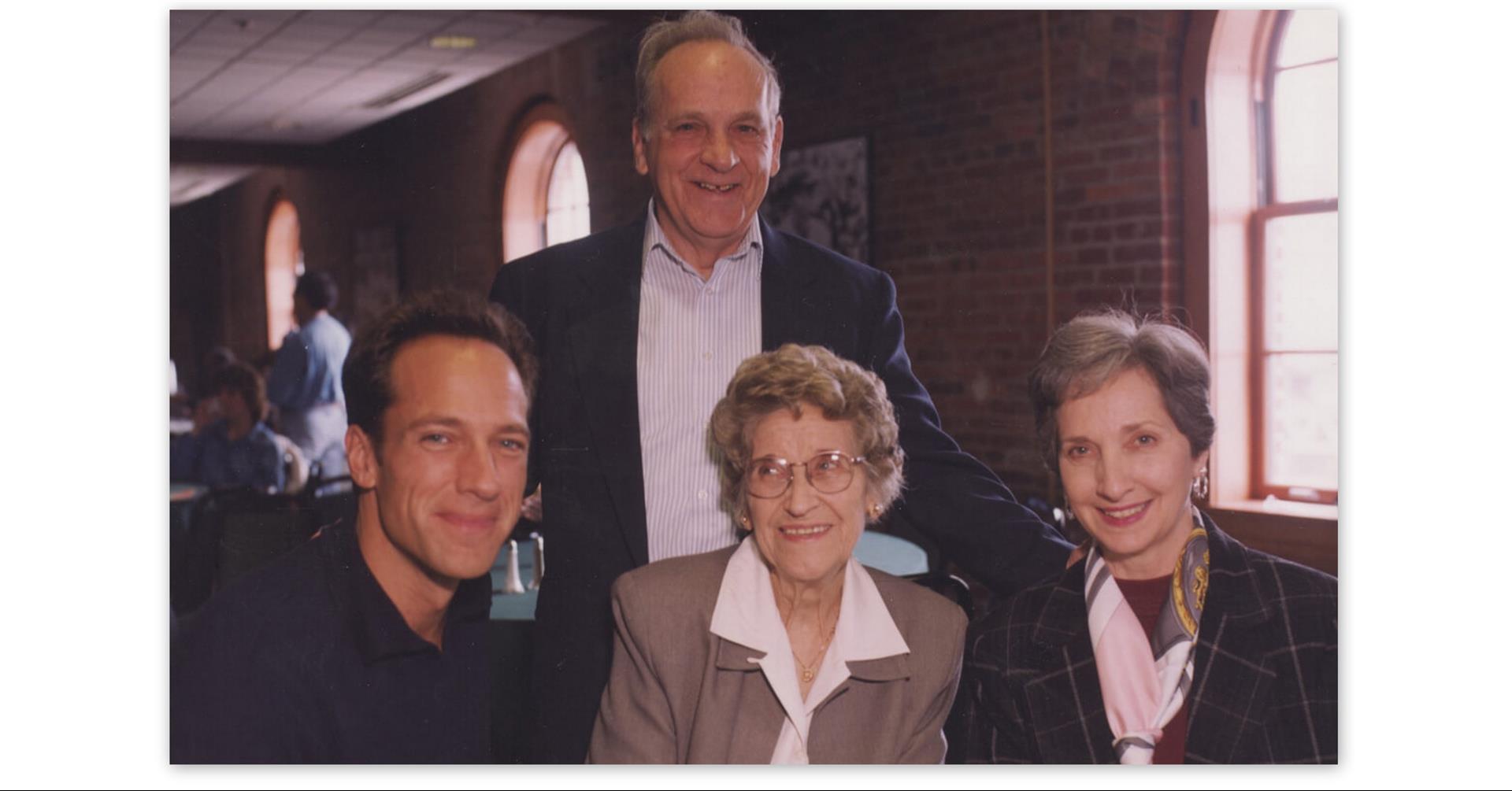 Mother. Grandmother. Realtor. Baltimore Orioles groupie. These are just four of the roles that the late Thelma Knobel played in the Rowe family of Baltimore. Her daughter, Peggy, recently published a memoir— About My Mother: True Stories of a Horse-Crazy Daughter and Her Baseball-ObsessedMother — filled with stories about Thelma, and Peggy’s own three sons, including popular television host, Dirty Jobs‘ Mike Rowe.

In the foreward to the book, Mike Rowe calls his memorable grandmother “judgmental yet loyal, snobby yet kind, haughty yet humble … a consummate perfectionist and notorious neat freak who sought to keep all those around her scrubbed and tidy and firmly between the lines.” Of Dirty Jobs, he says “it mortified [her] in every way imaginable.”

However, it is Peggy Rowe’s remembrances of her mother, from the time Peggy was a child, throughout the years that she was raising her family (and living next door to her parents) and Thelma’s later “super fan” years, which make up the heart and soul of this book.

Fans of Mike Rowe first learned of Peggy’s gift for storytelling via his Facebook page. She now has her own fan page called “Peggy Rowe’s Little Facebook Friends” which has thousands of followers.

Next Avenue asked Peggy Rowe to tell us a little bit about her mother, and why the excerpt from her book (below) may resonate with other mothers and daughters with differing perspectives on housekeeping.

Peggy Rowe: The most challenging part was deciding which stories to include. In the 67 years I lived with or near my mother, the stories were endless. In the book, I speak of two mothers: Mother No. 1, the refined perfectionist, and Mother No. 2, the crazed Baltimore Orioles groupie. There was a Mother No. 3, the mother who was determined that her legacy to the world be her two cultured, polished, and well-educated daughters. Those stories alone could fill volumes. The most joyful part was the realization that my mother had fulfilled her parental responsibilities — in spades!

If you could describe your mother, Thelma, in one word, what would it be and why?

Growing up, I saw my mother as ‘intrepid,’ though I didn’t know the word at the time. Fearless, daring and bossy, there was nothing she could not do. And she was a devoted wife and mother.

In the excerpt below about your mother’s visit and her ‘subtle approach’ to criticizing your housekeeping skills, why is this such a relatable story about how a mom can lovingly disapprove of how her daughter is running her home?

It wasn’t in my mother’s DNA to ignore my housekeeping deficiencies. That said, her love allowed her to use a subtle approach. In the end, she knew what was important when it came to her grandsons’ well-being and happiness. Although she never stated it as such, her maternal philosophy was: If you can’t have the whole apple, sometimes you settle for a bite.

Excerpt from ‘About My Mother: True Stories of a Horse-Crazy Daughter and Her Baseball-Obsessed Mother’

For my mother who was a foot soldier in the battle against dust and clutter, visiting our house was a walk on the wild side.

Seven-year-old Michael was reading a book to two-year-old Philip the summer morning Mom popped in on her way to the office. I was sitting at the coffee table in jeans and a baggy shirt helping Scott with a jigsaw puzzle when she appeared through the porch window.

“It’s the mother ship,” said four-year-old Scott, looking up from the puzzle.

I sat up straight, smoothed my wrinkled shirt, and neatened my ponytail, wondering briefly if Scott was watching too much Lost in Space.

To her credit, my mother never openly criticized my housekeeping skills. Her approach was a bit more subtle.

“Hmmm… It must be nice to have all your housework done,” she said, taking in the chaos.

While Philip looked at me and asked, “What’s housework, Mommy?” Mom nudged Caesar the cat out of the way and gave Missy her traditional greeting.

“Nice doggie…now go away. Are you finished with this pile of blocks?” she asked.

She walked around the national landmark, then lifted the skirt of her smart business suit (with the prestigious Hutzler’s label sewn inside the collar) and stepped over a Lincoln Log village.

Then she gathered up several small toys from the floor and deposited them in the playroom/den, saying as if to herself, “There now, that wasn’t so hard, was it?”

I grimaced, as I always did when Mom caught me relaxing. This wasn’t the way she had raised her daughters, for sure. I couldn’t remember a time when our living room was cluttered with toys while my mother was sprawled on the floor with her girls. If she thought I was lazy, she never actually said as much.

“What in the world do we have here?” she asked, throwing her hands in the air in mock surprise as she stared into the dining room.

The boys rushed to show off their latest collection of birds’ nests, pinecones, and snakeskins.

“Hmmm … very nice. What is this?” she asked, picking up a round, prickly object.

Michael took a book from the table. “It’s called a seed pod, Nana. See? Here’s a picture.”

“It’s from the sweetgum tree way back in the field,” Scott chimed in.

“Did you wash your hands? I guess you know what poison ivy looks like,” she said.

“Uh-huh,” Scott said, putting his left foot up on the dining room chair and pointing to a red rash on his leg. “It looks like this. The white stuff is called calamine lotion.”

My mother looked around her and sighed. “Well, it doesn’t look like you’re having company any time soon. Which reminds me …”

Finally, the real reason for her visit. “The Beckleys are coming for pinochle this evening at 7 p.m.” This was code for, “Have the children pick up the sticks and toys from the yard by 6:30 p.m.” She had an image to uphold after all. Mom never had sons.

Award-winning real estate agent Thelma Knobel told her grandsons goodbye, and as she left for the office, turned and smiled at me. “Goodbye, Honey.” I told myself that it was her way of saying, “Maybe there’s more than one way to raise children.”

I exhaled, grateful that she hadn’t gone into the kitchen where two box turtles named Shelly and Myrtle roamed the linoleum floor like cattle on the streets of Calcutta.

About My Mother: True Stories of a Horse-Crazy Daughter and Her Baseball-Obsessed Mother is published by Forefront Books.

Julie Pfitzinger has worked as a writer and editor for more than 20 years; most recently she was a managing editor for the community lifestyle magazine group at Tiger Oak Media in Minneapolis, where she also served as editor of Saint Paul Magazine.

PHOTO: At the very top are Mike, John, Thelma and Peggy. Michael, Peggy, Scott and Phil are pictured in the middle. Both photos are courtesy of Peggy Rowe.