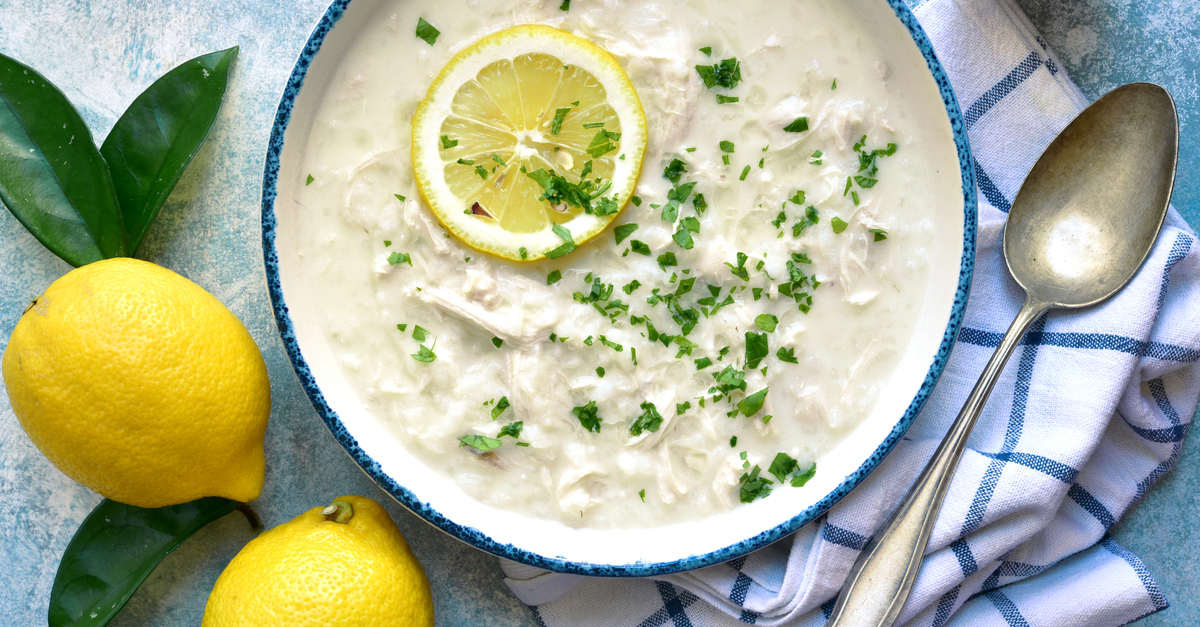 Not About the Soup: A Sister's Recipe for Her Brother's Last Days

By Michele Weldon for Next Avenue

The trick is to whip the eggs fully and mightily with the juice squeezed from the fresh lemons -- carefully so as not to drop in any seeds -- add them to the chicken broth steaming and promising, slowly, like someone afraid to fall off the edge of a tightrope, stretched across the canyon.

Careful; otherwise the eggs start to cook and they leave behind streams of egg as happens in egg drop soup and this is not that. I add three times as much lemon juice as the recipe demands, because I know feeling the tart smack in your mouth full of creamy sunny yellow richness will be a surprise reminder that someone did not follow the rules.

There are only three ingredients in egg lemon soup: chicken broth, eggs and lemon juice. I need to make things simple, even though they are not. I am making this for my brother, Paul, one year older than me, fifth sibling in a tribe of six in fewer than eight years, who is dying of multiple myeloma. He is 64.

I pour the daffodil-colored hot soup into the blue ceramic pot, tape down the lid with black electrician's tape and head to his house in a nearby Chicago suburb — a 20-minute drive from mine — for Saturday soup delivery. This has been my routine every weekend for the past year, five years after his diagnosis. In the past six months, his symptoms and pain have crescendoed.

Preparing for the End of Life

"You know this is not about the soup," my older sister Madeleine says to me after I call her panicked that I do not have ham for the split pea soup I was making for Paul one Saturday months earlier. "It's that you make him the soup."

Five years ago, Paul switched insurance companies and had the required physical that uncovered multiple myeloma through a blood test. No symptoms. Projected survival is five years for 53% of patients; 35% survive 10 years. Some lucky patients last longer.

Paul won't be one of them, though he doggedly pursued chemotherapies and early on had a stem cell transplant. He is weak and has lost close to 100 pounds; now 6'3 and about 130 pounds, his arms thin as broomsticks, his cheek bones steel-angled, pronounced.

During his last visit to the hospital following a seizure — his fifth visit in as many months -- the doctor called a family end of life meeting. We cried, asked questions, listened, held hands, planned for what we could not imagine.

In my earlier batches of egg lemon soup this winter, I would make the rice separately in the rice steamer, with brown rice, not white, and spoon the clumps of downy warmth into the soup, stirring, wishfully, tenderly. It is late spring, and in the past week, Paul can no longer swallow food; it is liquids only and I add extra broth to this batch to make it leaner, easier for him to sip when I hold the spoon to his lips.

I am not his caretaker; I am the sister Saturday soup maker offering a different soup each week from tomato to mushroom, French onion, chicken vegetable and white bean. I am one of his four sisters plus one brother who visit him and offer him what we can as often as we can.

His wife, whom he married six years earlier, organizes many of the details. He had only been married to her for one year when he was diagnosed, their wedding coming after 11 years of Paul raising his three children alone as a widower; his late wife, Bernadette, died from an undiagnosed brain tumor in 2004.

His two daughters and a health care worker who stays overnight have been doing the bulk of his daily care including the buffet of medications delivered and logged onto a white board with blue marker.

He's full-time in the first floor den now, off the family room, the hospital bed facing the huge picture window onto his tree-draped yard, luscious and hopeful as far as you can see. There are family photo albums piled onto the side tables, framed photos of him from childhood and pictures of recent family weddings sustain a parade of grins on the windowsill.

Too quickly following his last hospital stay, within weeks, the tempo switches to hospice care. Paul remains in the den, but it is different; he is different. The future has a different shape.

His youngest daughter, Marirose, is most always by his side; she moved from Los Angeles the year before to be with him and help with his business. His oldest, daughter Treacy, arrives with her husband, Dan, from their house a few miles away each day to help. She is in the kitchen. His son, Matt, is upstairs, in from Florida.

Memories of the Past, Comforting Acts Now

Everyone is waiting and everyone is wounded; it feels inappropriate to laugh, but also urgent. So, I try to sprinkle in a joke just to feel something other than desperation.

"Remember when our Dad used to go upstairs before the parties at our house ended and just lay on the guests' coats to go to sleep?," I ask.

Paul smiles. I am positioned near him on his left side so I can stroke his face; his four-day beard is reddish blonde stubble, but soft.

I don't heat up the soup anymore after I arrive as I have for most of the past year. He loved it piping hot, an extra minute in the microwave. It's OK at room temperature now. I tell him I have egg lemon soup and he mouths the words, "Oh good."

Four spoonfuls is all I can manage for him, urging him to swallow each time, reminding him to close his lips. Marirose can usually get 10 to 15 spoonfuls accomplished; that is what we hope for.

"Our Father who art in heaven, hallowed be thy name," I start a decade of the rosary, holding the rosary draped over the guardrail. Paul is more fully devotional than I am, more authentic in his faith, though we share the same beginnings. We said the rosary every night as a family in the house on Clinton Place, then the house on Jackson Avenue.

Paul was my middle-school protector from bullies, my companion on double dates for his high school's prom when he set me up with his friends or my high school homecoming when I set him up with mine. Later, he was my business adviser, my life and parenting coach, my friend. He kept secrets. He did imitations. He loved to dance.

Paul says he promised my mother before she died that he would watch out for me as a single mother raising three sons; that promise to her was nearly 20 years ago. Every time Paul helped me or my sons — hiring a clean-up crew after a basement flood, helping find a roof contractor, referring clients to me, advising Brendan on school, Colin on work, Weldon on life -- he would say, "I promised Mom I would."

Paul is breathing through his mouth; I worry that his lips are chapped and his mouth is dry, but he does not seem to notice. I make a note to ask Treacy to swab his mouth and put Vaseline on his lips because that would be my way of trying to help. She knows and does not need my reminders. I am trying to help, but it is like trying to stop a speeding train with rose petals.

I finish the 10 Hail Marys and say, "Glory be to the Father, to the Son, and to the Holy Spirit, as it was, is now, and ever shall be, world without end. Amen."

Marirose comes in from the side door off the kitchen, picks up the bowl of soup and tells Paul she needs him to swallow after she gently places the spoon to his lips and pours a spoonful of soup into his mouth. She gets him to swallow 38 spoonfuls. Thirty eight. We count them one by one softly. It is the most he has eaten in several days.

It's 2006 and we drive a short distance to Tarpon Springs, Fla., from his house in Palm Harbor, to enjoy a Greek dinner at Mykonos, one of the many restaurants in what is called an "authentic Greek fishing village."

It was one of the many times my three sons and I visited him and his three children in Florida for spring break — both of us single and combining our families after the death of his wife and my divorce. Motherless, fatherless children together for a week where all six of them could enjoy two parents.

"U.P.," my sons called him, for Uncle Paul. I was just Aunt Michele.

We order the egg lemon soup and mounds of other dishes — some flaming — and devour them all with such craving it was as if we knew this moment was soon just a memory and that it would make us laugh every time for many years.

I was hoping this batch of soup would remind him of our jaunts to Tarpon Springs when we walked by the piers, my sons begging for new T-shirts, sandals or whatever was fluttering on ropes in small kiosks feet from the water, handprinted signs declaring they were on sale for $5.99.

I ask Paul if he remembers the rap song my sons made for him — and performed — for his 50 surprise birthday party. Their chorus was, "Where the palm trees sway and the girls say, 'Hey.'" I sing the chorus for him and Paul smiles broadly, his eyes still closed.

It is my last batch of soup for Paul, our last Saturday. He dies early the next Monday morning.

Months later, I can't bring myself to make another batch of egg lemon soup for my family or his children just yet; it's too soon. But when I am ready, I will buy extra lemons and stir in the eggs slowly, carefully and imagine his smile.

Michele Weldon is an author, journalist, emerita faculty in journalism at Northwestern University, senior leader with The OpEd Project and editorial director of Take The Lead, a global women's leadership initiative. Her latest book is "Act Like You're Having a Good Time."