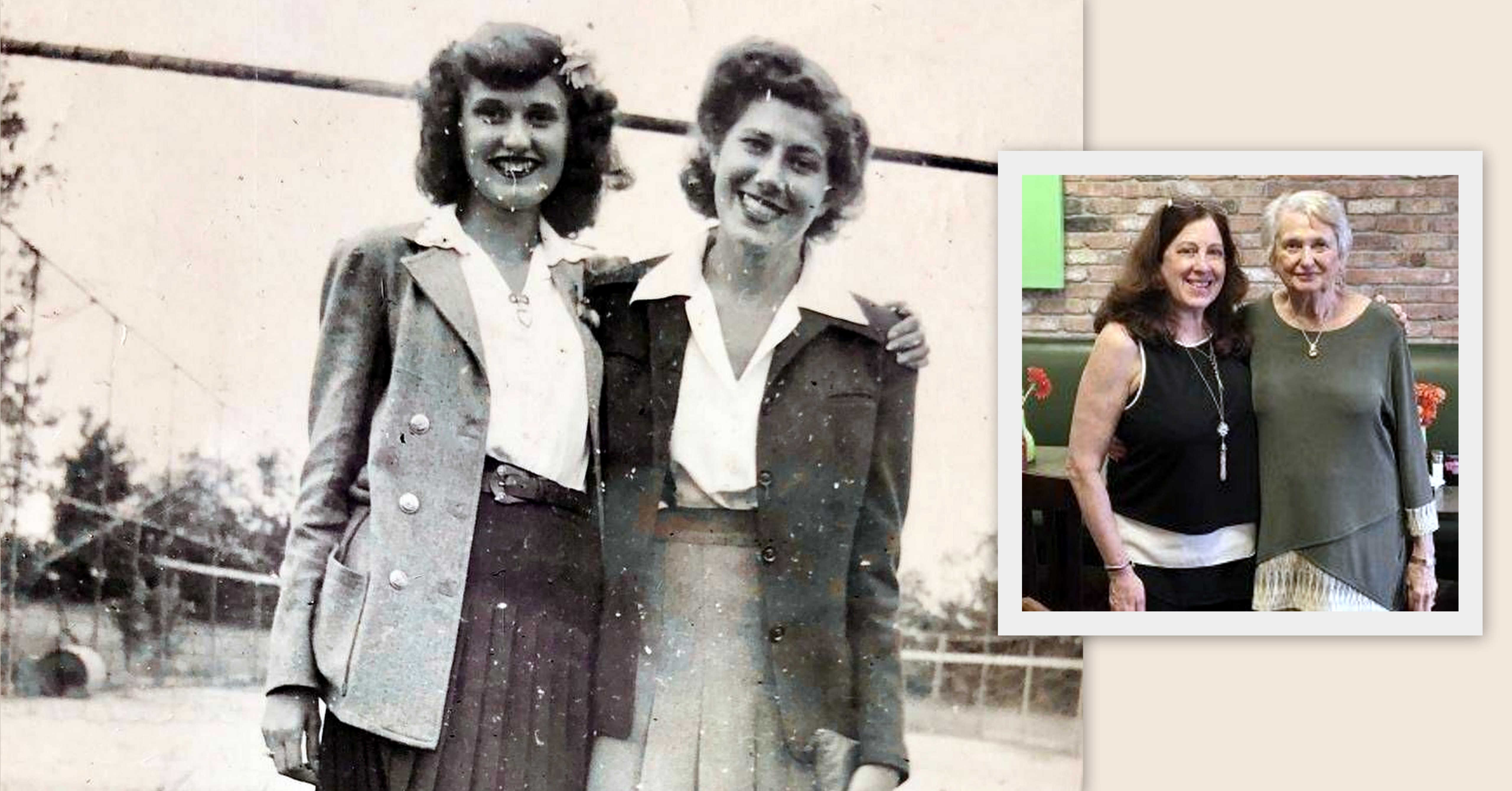 My Almost Other Mother

By Patricia Weiss Levy for Next Avenue

Many people have many children. Some have multiple spouses. But most of us only have one mother. And when you lose your mom, as I did a dozen years ago, it leaves a hole in your heart. A hole in your soul. A hole that will never heal.

But then something happened to help ease the pain. I became friends with my mother’s best friend.

My mother, Bunnie, and Nada (pictured above, left, as teenagers) had grown up together, gone to college together, then married and had children in tandem. Why, they’d even divorced and remarried with synchronicity rivaling that of the Radio City Rockettes. Were they following the same how-to manual?

Then, a few years after my mother died, Nada’s second husband died, too, and she wrote that she was moving to South Florida. My husband and I visit Miami each winter.

That winter, a new ritual was born. We went to spend a day with Nada. It was like heaven on earth — the closest thing possible to spending one more day with my mother.

Nada and my mom had been friends since age 9. So, when Bunnie had taken a writing course after retiring, Nada had figured prominently in her work. I brought a few stories along.

One told how on my mother’s tenth birthday, Nada’s dad, a dentist, had cleaned her teeth for free.

My grandfather, meanwhile, had sold insurance so unsuccessfully that my grandmother had been obliged to work, too. As Nada’s best friend, though, my mother had gotten to tag along with her to the theater, restaurants, and even on vacations, “enjoying many extravagances my family could not provide,” she wrote, “like Ebinger’s famous pastries.”

"Ebinger’s?” my husband asked when he read the story. “What was it – like Entenmann’s?”

“Much better than Entenmann’s!” I replied, recalling their chocolaty Blackout Cake.

Their standard of living wasn’t the only difference, though. My mother went on to describe what polar opposites they were. She was a packrat, Nada a neatnik obsessed with punctuality. Given that, I was embarrassed to arrive late.

But then I saw a face I hadn’t laid eyes on in years. Although now 86, Nada was unmistakably Nada. Within seconds, we melted together in a long-overdue embrace. Then I followed her inside, which was, needless to say, immaculate. (Nada and Patricia Weiss Levy are pictured above, right.)

Our Unbreakable Bond — My Mother

Over lunch, she recounted how my mother had once sworn her to secrecy, mortified that her own mother had become a bookkeeper. No one else she knew in the 1930s had a mother who worked.

As for Bunnie’s second husband, comparing notes came as comic relief. After enduring my father’s bullying for decades, my mother had had no patience for her second spouse. Yet after Sid died, she had begun driving around with his photograph perched on her passenger seat, lamenting endlessly that she would never meet as good a man again.

Hearing this, Nada couldn’t contain her laughter. “She said the exact same thing to me, and I thought I must be losing my mind!”

That’s when I realized that, although we hadn’t really talked in years, if ever, Nada and I had always been inextricably linked, bound by an unbreakable bond – my mother.

When I read her the story about Ebinger’s pastries, my husband inquired about them again. “Were they like Entenmann’s?”

“Much better than Entenmann’s!” Nada and I replied in unison, laughing again.

But when I came to the birthday teeth cleaning, her eyes flooded. “I never knew my father did that,” Nada said. “But I’m not surprised. He was a wonderful man, and she was my best friend.”

Afterwards, I longed to call my mom and relate every detail. How happy she would have been!

Over ensuing years, we found much more to discuss than my mother. But the truth is that we never just sat around extolling her virtues. We also kvetched about her.

Two peas in a pod they were not. My mother didn’t just run on what we jokingly refer to as “Jewish time”; she could’ve set a Guinness World Record for lateness.

She and Nada had once vacationed in Mexico, and 60 years later Nada was still unnerved recalling how my mother had kept her waiting while shopping for souvenirs.

Like most apples, I didn’t fall far from that tree. But my mother and I were also different people. We argued about everything, from food to fashion (she thought gray was a color and wanted me to tone down my style).

Now I’d give anything to fight with her again. Yet as close as we were, I couldn’t have lived with her for months, as I did with my own kids and their spouses when COVID-19 struck.

Meanwhile, Nada and I continue to spend less time consoling each other than confiding about our current lives. So I was overjoyed when she chose to move north to be near one of her sons. It’s just over an hour from my home.

I saw Nada again recently. Heaven on earth again, but much closer to home. And much easier, I’ll admit, than spending time could be with my mother.

Due to the pandemic, her assisted living facility wasn’t allowing visitors inside. We spent our recent visit outdoors. If those restrictions persist, I won’t get to see her this winter.

Many people cannot see their own parents, children, grandchildren, and others now, however. I shouldn’t complain about not visiting a newfound friend.

Yet I would miss her sorely. Her precious memories predate my parents’ contentious divorce. And somehow, she keeps coming up with new ones.

During my latest visit, she whipped out an album filled with snapshots of “the girlfriends” as teenagers. I adored seeing their vintage hairstyles and svelte, pre-childbirth physiques. But mostly I loved seeing the radiant smile on my mother’s face. She had no idea what awaited her.

I once feared Nada’s sons might suspect I’m trying to hijack their mother somehow. But now I assume they recognize the truth. Caring for older parents is a huge responsibility. Having another person who cares, calls, and visits is good for everyone.

Besides, Nada clearly relishes our friendship too. She also lost my mom, and lifelong BFFs are almost as hard to replace as mothers.

Although 92 now, Nada hasn’t lost a step. I hope she stays as sharp as she is and hope she lives forever.

Meanwhile, my own BFF and I have made a pact. When we are old and gray, we will be there for each other’s daughters and sons as well. I also hope that my dear old friend lives forever.

But hearing from her children many years hence? Now, that would be heaven on earth, too.