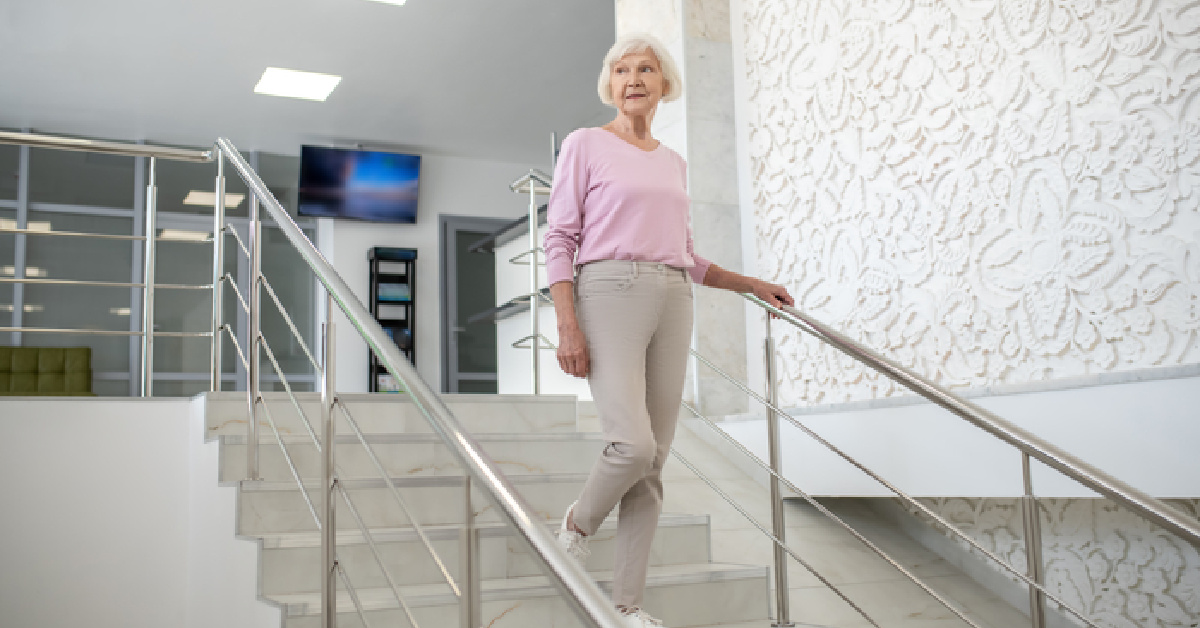 Falling Can Be Fatal

When we fall as kids, we're told to pick ourselves up and start over again. As we grow older, the issues around falling turn darker. Many older adults grow fearful, seeing scary ads for alarms to engage if we fall and can't get up. If people knew all the facts, they'd be even more concerned.

Every year more older Americans fall, and while many of these incidents are soon forgotten, others are severe, even fatal. Falls are the leading cause of injury-related deaths among older people.

Always use handrails, no matter how few steps are involved.

"Studies suggest that approximately one in two women and one in four men age fifty and older will break a bone due to osteoporosis," Gill said.

Take a close look around your home, where more than half of all falls take place. Falling is not normal and it's not something to expect as we grow older.

Here are 9 steps we can take to minimize the risk.

Step 1: Eliminate clutter, throw rugs and poor lighting. If you need to get out of bed at night, turn on a light and move slowly.

Step 3: Make sure handrails are easily accessible for any stairs. When facing stairs anywhere, always use handrails, no matter how few steps are involved.

Step 4: Strengthen your hands. Try using a power ball or a grip strengthener.

Step 5: Check balance issues. An appointment with a qualified neurologist may be required.

Step 6: Check your vision. A new eyeglass prescription can be a lifesaver.

Step 9: Add physical exercise to your routine. Walking on a regular basis has profound health benefits and "physical activity can reduce morbidity and mortality," according to a recent study in The Lancet medical journal.

One story from someone I spoke with was especially poignant. When Evan Houtrides got a late-night panicked call from his 83-year-old father, osteoporosis was the furthest thing from his mind. His dad fell and couldn't get up. There was surgery for a broken hip, and then rehab.

Things seemed to be on the mend, but then it happened again. Again, there was surgery and rehab, but the slowing down was huge, the cognitive impact was noticeable. Houtrides said the doctor believed the bones broke first, and that the breaks caused the falls.

Houtrides' dad was once the producer of a major television show. Now he requires 24-hour care.

I Resisted Osteoporosis Medication — Until I Fell

For decades, doctors told me I should be taking medication for osteoporosis. I resisted. The drugs offered promised to stop bone loss but made the bones brittle. A friend took the same drugs and broke several bones when she fell. She believed the breaks were more serious than they would have been had she rejected the suggested medications.

In 2019, I tripped on a loose rug going up two steps at the theater. I told the story as a humorous anecdote: "I got into a fight with a rug," I'd laugh, "and I lost."

But the event wasn't fun. My arms and knees turned black-and-blue, and my face looked horrible for weeks. I was lucky. X-rays showed that nothing was broken.

But the event got my attention. I began to research falls, and osteoporosis. I found that the newer medications didn't only stop bone loss, they remodeled or encouraged bone growth. Still, I hesitated.

Why don't people do what works? There are valid reasons.

There are the possible side effects. The website for the drug prescribed for severe osteoporosis lists the possibility of unusual thigh bone fractures and strokes leading to death.

Then there is the cost of the medication. Even with insurance, the monthly out of pocket can reach into the thousands of dollars. Moreover, until there is a medical emergency, osteoporosis is a silent killer. Any aches and pains may just be dismissed as age related.

Until there is a medical emergency, osteoporosis is a silent killer. Any aches and pains may just be dismissed as age related.

Even though I'd had the requisite bone density scans that showed I was at risk for severe fractures, there was an element of disbelief. After all, I'd once been a professional dancer. I'd seen x-rays of my feet that showed strong bones, thick and dense. So, I resisted.

That is until two different physicians, each a clinical associate professor at NYU's Grossman School of Medicine, changed my mind. Endocrinologist Susan Zweig said that, in my case, the risk of fractures far outweighed any risk from the medication. Cardiologist Alan Shah said that the connection between fractures and morbidity had been documented. That people who suffered fractures would die sooner than those who had not.

So I've finally begun treatment — decades after I first was warned. I hope I am not too late.

In Houtrides' father's case, bone density scans after his falls revealed tremendous bone loss. If the tests had been done early, his father could have availed himself of preventative measures and medications that might have led to a better outcome.

How do you know if you are at risk? The first step is to arrange for a bone density/DEXA scan. This is a painless low-dose x-ray test that will show if your bones are healthy or are deteriorating.

There are many resources available with information about risk factors, fall prevention and more.

The websites of the individual medications mention extreme possible side effects. The official Evenity website, for example, warns of increased risk of heart attacks. Consider the risk versus benefit. Here's where talking to a doctor you trust becomes all important.

What About the Cost?

Pills and injections given at home can rack up high costs. Medicare only covers some of this. For the most severe cases, because the injections are administered in a medical setting and the provider accepts Medicare assignment, the patient isn't responsible for the higher amount.

Fractures can and do lead to problems with mobility, depression and loss of independence. The American Academy of Orthopedic Surgeons says death following fractures is a documented reality. Bone health is vital to our overall health, well-being and longevity.