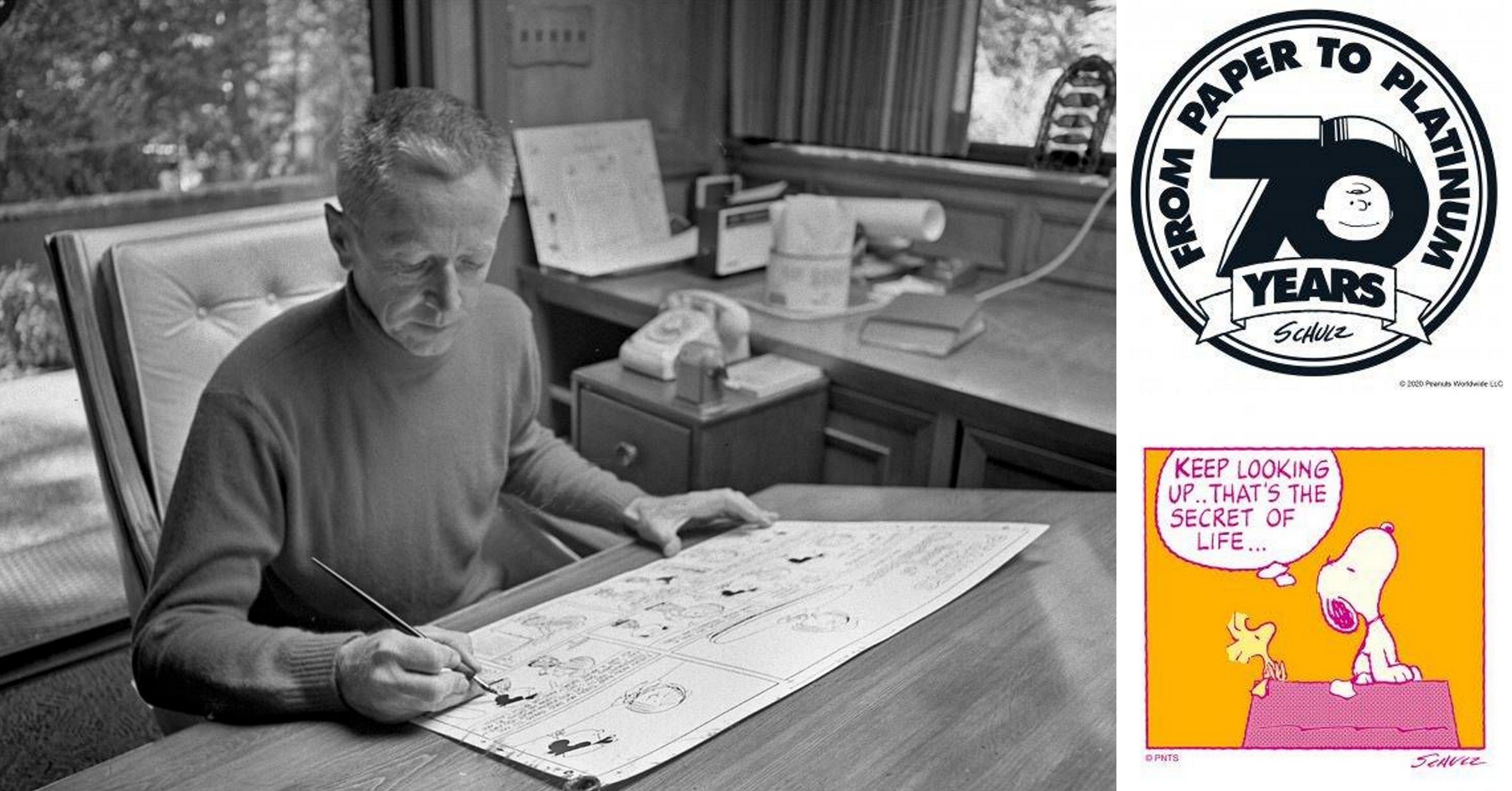 By Sherri Snelling for Next Avenue

There is much that currently divides the country, but one thing will unite us: the love for the humorous humanity of the comic strip, “Peanuts.”

October 2 marked 70 years since Charles M. Schulz first debuted his United Features Syndicate “Li’l Folks” (as he originally titled the strip) and it has been 20 years since he penned his farewell comic strip.

Yet Charlie Brown, Snoopy, Lucy, Linus and the rest of the “Peanuts” gang remain a beloved, timeless pop culture reminder of life in the second half of the 20 century.

Everyone from American presidents to astronauts to actors to academics have opined on the “Peanuts” effect and the strip's meaning in our lives.

President Barack Obama wrote in his introduction to Volume 25 of "The Complete Peanuts,"  that “like millions of Americans, I grew up with ‘Peanuts.’ But I never outgrew it… what made Charles Schulz so brilliant — he treated childhood with all the poignant and tender complexity it deserves… ‘Peanuts’ was our own daily security blanket. That’s what makes it an American treasure.”

President Ronald Reagan reportedly said he personally identified with Charlie Brown, and his favorite gag was Lucy pulling the football away from him at every kickingattempt.

The Meaning of Life

When asked by a reporter what he thought made “Peanuts” so successful, Schulz replied his comic strip was just about “everyday life.”

Schulz wrote and drew all the strips himself — almost 18,000 over 50 years — a feat unmatched by many artists who use apprentices.

With more than 330 million readers in 22 languages in 75 countries, “Peanuts” offered ordinary yet complex characters, the wonder of childhood in a vulnerable world and a melancholic, yet hopeful place where the simple truths of everyday life continue to capture our collective attention.

Schulz embraced sophisticated themes that were not yet mainstream in American life of the 1950s-1990s, and reflected them in ways relevant to adults and children.

Some examples: philosophy (“What is the meaning of life?” asks Charlie Brown throughout the series), psychology (Lucy’s “The Doctor Is In” booth for 5ȼ worth of tough love psychotherapy) and spirituality (Linus, the intellectual of the bunch, shared his theological musings on everything from The King James Bible to the existence of The Great Pumpkin, all while clutching his ever-present security blanket).

These were pretty heady topics but Schulz’s genius, much like Walt Disney’s, was capturing childhood issues that also resonated with parents. By turning the age-old saying, “Children should be seen and not heard” on its head, Schulz made his young characters seen and heard absent of any adult characters ever appearing in the strip.

Without much ballyhoo, Schulz transcended time by embracing changing social norms that continue to be prescient today.

Charlie Brown represented Everyman, and while some saw him as a hapless failure (a baseball team that never wins, the Little Red-Haired Girl who pays him no mind, a kite that gets constantly caught in trees), Schulz actually makes him the eternal optimist.

Schulz despised bullies and realized children can torment each other. Even though Charlie Brown is taunted (“Blockhead,” “Good Grief, Charlie Brown!”) he is a survivor and ultimately a hero. He never stops trying to kick the football, despite Lucy pulling the ball away every time, resulting with him on his back.

Schulz’s message and moral are that Charlie Brown always gets up and tries again. He perseveres. He also was a trendsetter in pet relationships, in his case, the beloved Snoopy, where pets are members of the family and truly best friends and companions.

Throughout Schulz’s life, happiness was a warm puppy.

Lucy, unapologetic, bossy and crabby, was an early feminist character (or mean girl depending on your view). But Schulz empowered her by eschewing a typical children’s lemonade stand and making Lucy a pre-pubescent career female with a psychiatrist’s booth, a subtle nod to the role of women in the workplace and the search for self-discovery that was happening in the lives of boomers.

Despite her assertive demeanor, Lucy represents another central “Peanuts” theme and eternal dilemma of human relationships: unrequited love. Throughout the series, Lucy wantonly drapes herself across Schroeder’s mini piano trying to pry his attention away from practicing Beethoven’s sonatas, all to no avail.

As Lucy became more exasperated with Schroeder’s ambivalence towards her, Schulz was going through a divorce from his first wife who felt the comic strip had robbed her of her husband.

Peppermint Patty was the tomboyish, hippie kid in sandals being raised by a single dad. Her sidekick Marcie called her “Sir” and Schulz always had her in shorts and a shirt while the other female characters wore dresses.

The lesbian community adopted Peppermint Patty as their icon, although her evolving crush on “Chuck,” as she called Charlie Brown, may be more in touch with today’s gender fluid millennials.

Franklin was the strip’s first African American character, introduced in 1968 shortly after the assassination of Martin Luther King, Jr. Originally concerned about appearing patronizing to Blacks, Schulz was encouraged by a teacher and ultimately convinced by a few voices in the African American community to add the character.

Many Black celebrities today cite Franklin as a groundbreaking moment in entertainment, from actress/TV talk show host Whoopi Goldberg (who has a tattoo of Woodstock, the bird and Snoopy pal) to The Today Show's Al Roker to fellow comic strip creator, Robb Armstrong (“Jump Start”), who befriended Schulz and was honored when his mentor asked to use Armstrong as Franklin’s last name.

However, Franklin was Schulz’s second racially ethnic character; his first was José Peterson, who was half Mexican, half Swedish. Schulz normalized interracial friendships for young kids, making these characters conventional in an era of racial tension that continues today.

Snoopy, the iconic beagle with a whimsical Walter Mitty-esque fantasy life, became the strip’s star after Schulz had him walk upright and take on human qualities.

Schulz once remarked that his own personality was reflected in all the characters, but Snoopy became the embodiment of Schulz’s life course.

When Snoopy glosses over Lucy’s insults, it was Schulz accepting his contentious divorce. When Snoopy pursues The Red Baron and afterwards quaffs a root beer with Bill Mauldin, this was Schulz memorializing his WWII experience and his wartime editorial cartoonist hero.

As Snoopy perpetually has his book manuscripts denied by publishers, this was Schulz’s early strip “Li’l Folks,” which was dropped after three years. As Snoopy befriends a younger generation and another species in Woodstock, this reflected Schulz’s generativity and mentorship of younger artists, with a nod to the zeitgeist concert of the time.

As Snoopy experiences work burnout over being named “Head Beagle” but gets up everyday and does the happy dance — this was pure Schulz.

While most comic strips have waned with the decline of newspapers in the digital news age, the enjoyment and enduring legacy of “Peanuts” lives on.

Perhaps the televised Charlie Brown holiday specials, which have been broadcast every year since 1965 (capturing 50% of all TV viewing households in its first broadcast), help. They were the first animated programs to use actual children’s voices.

In 2019, “A Charlie Brown Christmas” reached 9 million viewers in a very competitive era of streaming content.

This success in TV spawned a series of broadcast “Peanuts” specials on topics ranging from WWI and WWII veterans to childhood cancer to an American history tour from the Mayflower landing at Plymouth Rock to astronauts Armstrong and Aldrin landing on the moon.

Snoopy has also been a featured balloon in the annual Macy’s Thanksgiving Day Parade every year since 1968.

But it’s not just the boomers who remember or love the “Peanuts” characters. In 2002, a poll found “Peanuts” to be one of the most recognizable cartoon properties in the world, known to 94% of the total U.S. consumer market and a close second only to Mickey Mouse (96%).

Forbes lists Charles Schulz as third, only behind Michael Jackson and Elvis, of “Top Earning Dead Celebrities” based on extensive merchandising and licensing deals.

And the “Peanuts” gang continues to inspire generations of all ages.

Snoopy has been mascot for MetLife (a 31-year run which ended in 2016) and, since 1968, the NASA program. In fact, the Apollo 10 mission had call signs "Charlie Brown" for the command module and "Snoopy" for the lunar module.

The band Coldplay penned a song, “Charlie Brown,” and the editors of the French magazine "Charlie Hebdo" chose its name from their favorite “Peanuts” character. In 2018, Apple announced new “Peanuts” content as part of a Space Act Agreement between Peanuts Worldwide and NASA to encourage students towards STEM (science, technology, engineering and math).

A Soul for the Age

Psychologists have long believed happiness follows a U trajectory during life: highest during our 20s, declining in our 30s and late 40s and rebounding to highest levels again later in life.

While many criticized Schulz for taking his early strip’s pensive musings into perpetual cheerfulness and contentment through the Snoopy character in later strips, it was an organic reaction, as Schulz was happy and contented in his personal and professional life.

In his 50s during the turbulent 1970s, Schulz had a successful second marriage and family life and was living his childhood dream of being a comic strip artist. He had brought his St. Paul, Minn. boyhood with him to Santa Rosa, Calif. where he built an ice skating rink and baseball diamond for the local community not far from his home. There is also the Charles M. Schulz Museum, dedicated to him and his “Peanuts” family (temporarily closed due to the pandemic).

It is poignant that the man friends called “Sparky” passed away the night before his farewell strip appeared on February 13, 2000. After Schulz's death, "PBS NewsHour" interviewed media scholar Robert Thompson who called the iconic comic strip “…arguably the longest story told by a single artist in human history.”

In his last strip, Schulz thanked his loyal readers and said he would never forget the characters he brought to life for 50 years. Neither will we. You truly are a good man, Charlie Brown.

Sherri Snelling is a gerontologist, consultant and national speaker specializing in caregiver wellness. She is CEO and founder of Caregiving Club and author of A Cast of Caregivers – Celebrity Stories to Help You Prepare to Care.