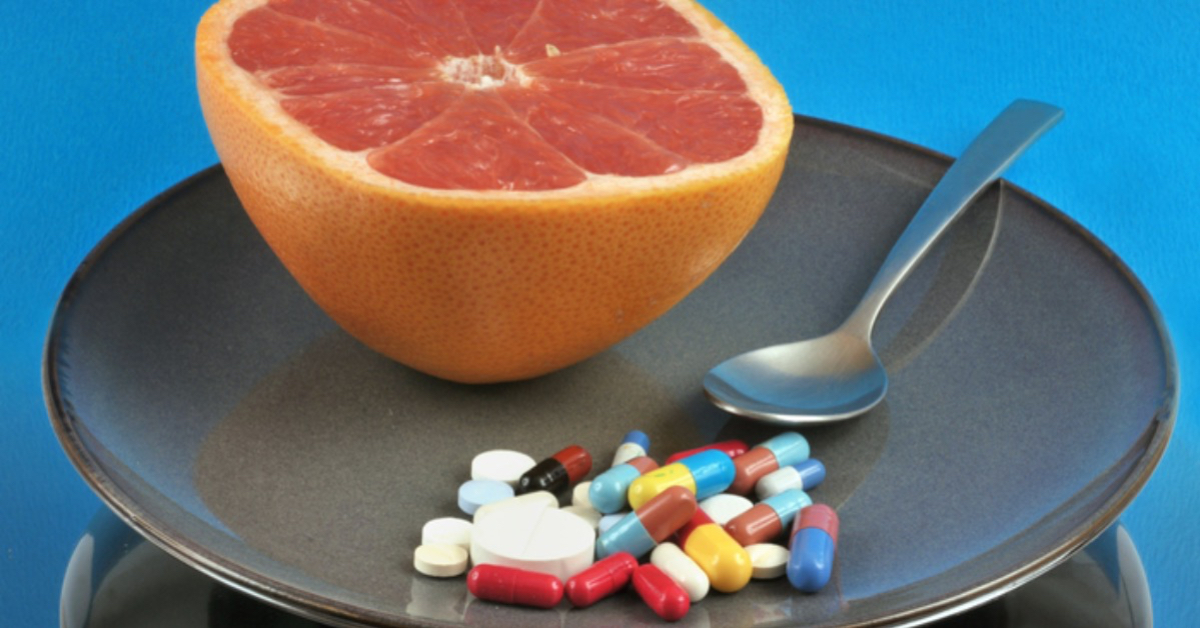 Why Can't I Eat Grapefruit? Foods That Interact With Medication.

Pirates ensured they had plenty of citrus fruits like limes and grapefruits onboard for their journeys. But if you are taking medication, these fruits might be a problem. Why? Some foods and herbal supplements can affect how prescription medications work in your body. They could even eliminate the effect of another drug or cause side effects.

However, the opposite is true – some medications can cause your body to absorb and use foods differently. According to Robert Alesiani, chief pharmacotherapy officer at Tabula Rasa HealthCare in New Jersey, "both delays in activation or elimination of a medication due to competitive inhibition can lead to a variety of adverse drug events, from poor or lack of response to a drug to risk of accidental overdose."

It is paramount to ask the right questions when being prescribed medication and before you begin taking a supplement.

It is paramount to ask the right questions when being prescribed medication and before you begin taking a supplement. But who should you ask? Will your doctor know enough about food and drug interactions, or should you ask your pharmacist?

"While some food-drug interactions are considered classic and should be known by both prescribers and pharmacists, others could require some research," says Alesiani. "Often, the problem isn't one of a knowledge deficit, but which health practitioner has the ample time to spend with you to explain the nuances of safe and proper medication administration."

Older adults tend to take more medications and may be treating several symptoms or illnesses simultaneously. And many take supplements on their own or on the advice of a doctor. However, herbal remedies can also affect the performance of a drug.

One commonly known food-drug interaction is grapefruit juice and statin drugs, which typically reduce the amount of drug that enters your bloodstream.

"Herbs can do one of two things. They can impact the speed at which drugs are broken down in the body (pharmacokinetics), and they can impact the effect that drugs have in your body," says Daniel Powers, supplement safety expert and founder of The Botanical Institute.

"It is important for [older adults] to double check on herb-drug interactions. In addition, the more daily medications you take, the more important it is to check with your physician or pharmacist before adding a new supplement."

One commonly known food-drug interaction is grapefruit juice and statin drugs. "Statins are broken down in your intestines by an enzyme called CYP3A, which typically reduces the amount of drug that enters your bloodstream," says Powers.

"However, grapefruit juice contains compounds called furanocoumarins that stop CYP3A from doing its job. As a result, more of the drug is absorbed, making it more powerful than it is meant to be."

He also adds that sometimes interactions can occur with foods or beverages we use daily. "Black tea can impact the absorption of drugs. The tannins in black tea can bind to various medications, including phenothiazines, and decrease how much medicine the body absorbs."

Many drugs have poor relationships with food or other supplements, but the timing of medications can also play a part in the efficacy of a drug.

For instance, to prevent your favorite black tea from interacting with your medications, do not drink black tea one hour before and two hours after taking phenothiazine medications.

The timing of medications can also play a part in the efficacy of a drug.

According to Alesiani, certain drugs are better absorbed on an empty stomach, considered one hour before or two hours after eating. This may be necessary to prevent a drug from binding to one's nutritional intake.

For example, a few antibiotics or vitamins can bind to dietary calcium, inhibiting absorption," says Alesiani. "Other drugs or supplements may also require a higher acidic environment for absorption."

Fortunately, there are ways to keep yourself safe from potentially dangerous food-drug interactions and make your medications work in the best possible way. Any changes in medicine or supplements should be done in collaboration with the prescriber and the pharmacist.

Powers suggests that when multiple doctors are involved with a patient's care, it is essential to go over medical history and disclose any supplements the patient takes with each doctor. "It could be potentially dangerous to assume that a new doctor is aware of every aspect of your personal medical history," says Powers.

"Doctors are humans like us, and small details can slip past them. So always start your conversation by informing them of your daily supplement routine."

Regarding safety resources, Medwise is an excellent reference and resource that helps pharmacists understand the effects of drug/drug or food/drug interactions and can help identify possible problems.

"A Medwise trained pharmacist can help a patient or family determine the best time of day to take medications so that all are effective and safe," says Alesiani.

Finally, always inform your physician or healthcare provider if you have symptoms that may stem from an interaction or are confused about when or how to take medications.

Rosie Wolf Williams is a freelance writer whose work has appeared in USA Weekend, Woman's Day, AARP the Magazine and elsewhere.