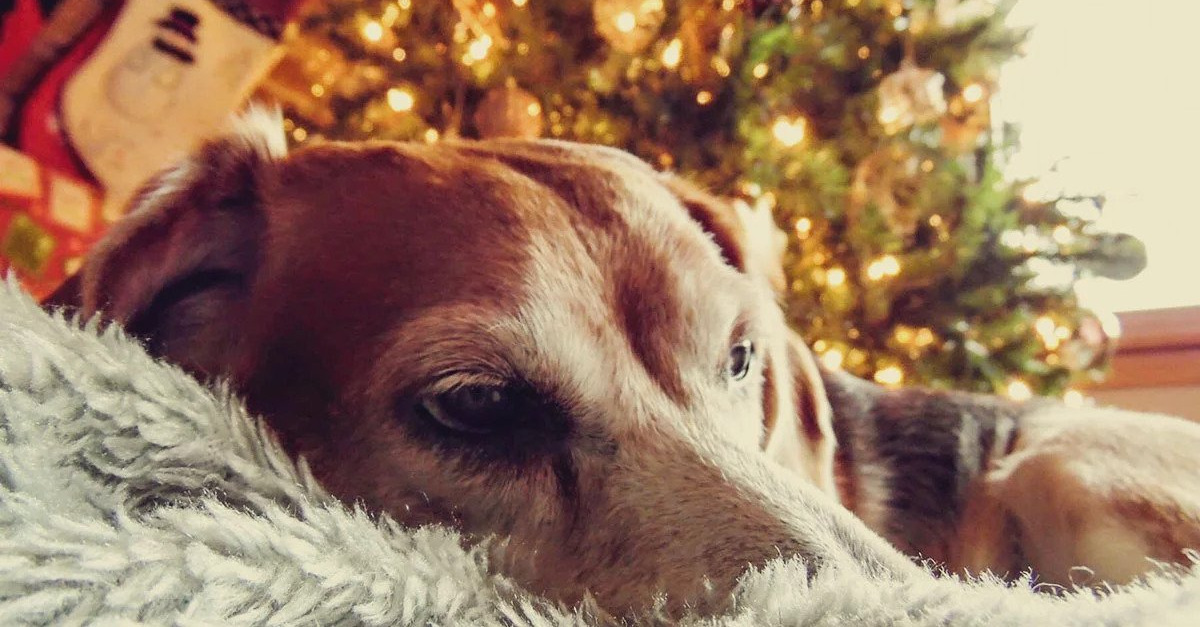 The Gift of A Dog Named Penny

By Stan Gornicz for Next Avenue

“Time to open Christmas presents,” I shouted after our family finished our holiday feast. “Penny first.”

We all rushed into my parents’ living room and watched their precocious puppy rip open her package, carefully wrapped in red and green striped paper. The sounds of crunching and tearing were soon replaced by the high-pitched squeaking of a colorful chew toy.

The mood at our home in central Connecticut had been lively since we brought Penny into our parents’ lives. But it wasn’t always that way.

When my mom was diagnosed with progressive multiple sclerosis in her early 40s, our family fell apart. Petite — barely five feet tall — with short wavy black hair, she was always moving: dusting end tables, vacuuming every inch of floor space and, with Dad, pruning bushes and pulling weeds in the yard. My mom’s diagnosis, involving one of the most unpredictable diseases, was an unexpected curve ball thrown to a family used to planning every detail.

I was 18, living at home with my  mom, dad and younger sister, getting ready to move out and start my first year at the University of Connecticut. My parents were planning to retire within 10 years.

My father, always cheery, turned quiet and solemn, pacing the rooms of our tiny ranch house in deep thought. Always a patient parent, he was trying to figure this out.

Mom’s slow calculated steps turned into measured shuffles. “I’ll be back later,” she said as she limped with her cane into the garage, and slowly climbed into our huge Chrysler. “Going to the bank to take my name off our accounts.”

My hopes of her improving and once again bounding down the back steps evaporated into the realities her doctors had mapped out.

I was scared, confiding to my sister that I wasn’t sure what was going to happen next.

“Maybe we can get Mom and Dad a dog,” she suggested.

The idea of bringing a new puppy into our house sent me into a panic. How could we handle this new responsibility when we were already struggling to figure out how we’d take care of our mom?

I decided to take a chance and surprise my parents with a new canine. It was the summer of 1983, and my girlfriend Donna and I started looking. Neither of us had had a dog growing up. After researching breeds best suited for disabled adults, we decided a Shetland Sheepdog, or Sheltie, would be a good fit. We headed to our local animal shelter.

Luckily, a new litter of a half dozen Shelties in shades of brown, black and tan had just arrived. The shelter assistant carried out wobbly pups, one by one, from inside a large crate. One stood silent. Another shook nervously.

“This one’s a little ball of energy,” she said. When the perky pup with tiny delicate paws was placed on the floor, she took off, running toward a nearby shelf, batting each item to the floor.

“She’s the one!” Donna said. On our way home, Donna held the squirming pup in her arms while I picked out a couple of bowls, a collar, leash and a few toys.

“What’s this?” my mother asked as we stepped into their kitchen. Her eyes narrowed, focusing on the little critter in Donna’s arms.

“A dog?” Dad asked, a slight smile forming on his face.

Penny wriggled free, jumped out of Donna’s grip, and landed with all four skinny legs splayed on the floor. Getting up and slipping on the shiny linoleum, she darted from person to person. Both Mom and Dad burst into laughter, as if their problems had suddenly vanished.

Our Dog, Penny: Part of the Family

Soon Mom’s regular place was a chair at the kitchen table. Needing help to stand and grab her walker, we’d hold her arm, keeping her steady and balanced while she was carefully taking steps in her blue canvas sneakers.

“Penny took my pillow,” Mom said, as the playful pup dragged the gold-colored throw pillow that supported her back. Penny dropped it at the base of Mom’s chair and curled up on it. “I guess that’s her bed now,” Mom chuckled.

Our new hound formed a strong bond with Dad. Growing up on a farm in Poland, he was used to having animals all around. Penny followed him everywhere. When he’d return from work every day, we’d hear him walking down the driveway calling her name in a singsong way — something I hadn’t heard in years. Penny came running, jumping up on him, her bushy tail fluttering.

When Mom became confined to a wheelchair two years later, Penny would fall asleep on the floor next to her. With no control of her arms and legs, Mom would shout out commands to sit, roll over or smile. Penny obeyed. If Mom needed something, she’d ask Penny to get my father, and our pup trotted off to find him. If he was napping on the couch, she’d lick his hand to wake him or let out a single bark, signaling he was needed.

When Penny was nine, I noticed she wasn’t hopping up the stairs as she had been. She was overweight from supper scraps and extra treats. Our vet told us she had Cushing’s Disease, an endocrine disorder that usually affects older dogs. He didn’t think Penny would live to 13, the lifespan of Shelties. My family had been trying to understand Mom’s decline, and suddenly we were stricken with Penny’s sickness as well.

Two years later, in 1994, Penny died. After returning from the vet, we carried her into the kitchen so Mom and Dad could say goodbye, her body limp in Donna’s arms. Mom looked at Penny. Her face sank. A tear ran down Dad’s cheek. How could this pup that once brought so much joy, now bring so much sadness? Penny had been just as vulnerable as Mom. Later that day, Dad and I buried Penny in the backyard where she had frolicked for the previous decade.

The Healing Power of Pets

Mom and Dad soon talked about getting another dog. Four months after Penny died, Donna and I, then married, brought home their new companion, a two-pound, eight-week-old black and tan Yorkshire Terrier that Dad named Butch.

Butch created an energized dynamic in their home. Because he required haircuts when full grown, conversations centered around creating his “style,” and setting up appointments at the groomer. Dad believed in the clean-cut look, so, unlike Yorkies in fancy, high-brow dog shows who sported long, wavy, well-combed manes, Butch had closely-cropped hair. Barely five pounds when full grown, Butch curled up on Mom’s lap, realizing she couldn’t run with him like the rest of us.

When Dad passed away in 2004, Donna and I adopted Butch and brought him to live with our family a short distance away. Our nine-year-old son and seven-year-old daughter were thrilled with our new addition, whom they’d gotten to know when we’d visited their grandparents. We continued to bring Butch to visit Mom, who had moved to a long-term care facility.

Mom and Dad’s pets had the power to heal us in our time of crisis. The responsibility of having pets helped us strengthen the responsibility we had to each other. Mom, Dad, my sister, and I found ourselves in deep discussions about puppy toys, training techniques, and grooming styles instead of focusing on Mom’s illness. We had lost hope when Mom was first diagnosed, but it only took a Sheltie and Yorkie to bring it back again.

And that was the best gift of all.

Stan Gornicz is a corporate writer and editor living in Wethersfield, Conn. He is currently working on a memoir about family values.