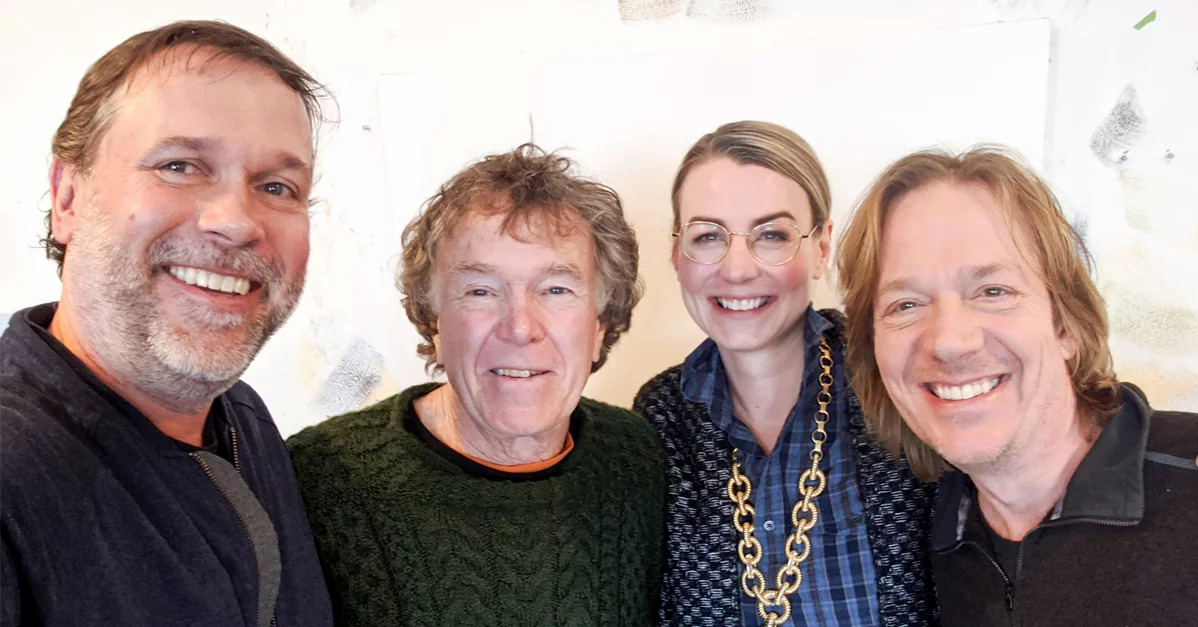 On a table crowded with microphones and wires, Sam Thiessen Devine places an unpainted wooden truck, outfitted with chunky wheels. At first glance, the simple toy appears to be a well-loved memento from Devine’s childhood. But this is an object that holds memories and stories, and ultimately played a part in the inspiration behind Kinetic Legacy, a Minneapolis-based company founded by Devine, James Holmberg and Sarah Anderson in 2018.

In more than one way, Kinetic Legacy is focused on stories. The microphones are set for the company’s Legacy Matters podcast, featuring  hour-long “kitchen-table conversations” with a host of individuals from the Twin Cities community, all ages, professions and avocations, some well-known and some not. More on that later.

For now, the truck. “When I was a kid, one of my fondest memories was going into my grandfather’s garage after school and building things with him,” says Devine, 45, adding the truck dates to around 1983, not long before his grandfather died of lung cancer.

A couple of years ago, Devine posted a picture of the truck on his Facebook page, reminiscing about the experience of making it with his grandfather.

“Before long, my cousins were chiming in with their own experiences of building things with Grandpa,” says Devine. “All of us had our own stories.”

Devine began pondering how his family members could curate those stories and images and privately share them, not only with each other, but with others who were now part of their lives, away from social media outlets like Facebook.

Around that time, Holmberg, 52, was facing a problem common to many of his generation. His parents had died, and he was left with a garage filled with their stuff.

“I felt guilty about throwing things away, because there were so many memories and stories attached to all of it,” Holmberg says. “Decluttering is so hard — what do you do with all the things that have been left behind?”

As Devine and Holmberg discovered, they weren’t alone in wanting to find a solution to preserve images and the stories behind cherished items. The two have known each other for more than 15 years and work together in the design-and-build industry on home and commercial projects.

“Our clients would talk to us about all the items they had, and how they wished there was some way they could record the stories of the history and meaning behind their things,” Holmberg says.

As the two saw it, the challenge was to capture the images of well-loved items, while at the same time finding an easy way to attach something even more precious: their stories.

“The context behind our important items is so valuable because it can be so easily lost through the generations,” says Holmberg. “Eventually, the description of any object can end up being, ‘Oh, I don’t know much about it, it’s just been in our family for a long time.’ But a lot of times, there is much more to the story.”

Working with a developer from northern Minnesota, Devine, Anderson and Holmberg created Andelin, “a social legacy app” for people who want to have an easily accessible and sharable way to store photos and stories about the people, places, events and things which have significance to them. (Andelin is the name of Devine’s three-and-a-half year old daughter.)

Not only can people upload photos, videos, oral and written stories, but the free app, which works on phones and tablets, also has a geo-location feature, so the exact location of a place or object can be digitally recognized.

Traveling down memory lane can be done simply, says Devine: “The school I attended in third grade is geo-located, and so is the house I lived in with my parents and grandparents, which was just a few blocks away from school. I’ve uploaded a photo of my grandfather, a picture of the house with the garage where we worked on our projects together and a photo of the truck,” he says, adding he wishes he would have been able to include his grandfather’s voice.

This specific memory can be shared with his cousins, and they can add their stories, too. “A curated memory of a kid’s truck can display the image, the place it was created, and the people’s lives it touched,” Devine explains.

Devine refers to Andelin as “a canvas” and explains that if users puts the time into collecting important memories on the app, they will have something beautiful to enjoy and something that others can enjoy as well.

Memories for All Ages

Andelin also gives families the opportunity to share stories and images with loved ones suffering from memory problems. For example, the images shared on Andelin could spark familiarity about family members, recognition of beloved places and items and also help provoke memories and conversation.

Something that has surprised Holmberg: the positive reaction Andelin has received from young people.  A 16-year old teenager in his family recently downloaded the app and reported that he liked that he could keep photos of friends and events private.

“A lot of young people are moving away from participating in social media because they don’t like the public part of it,” says Holmberg. “But many are sentimental about their childhood memories and want to share photos and things like that with people they choose. They see right through Facebook, and they like being a little bit off the grid.”

To access the Andelin app, currently free on the App Store, users have to log in with a valid email address; an Andelin account can’t be accessed through Google or Facebook. The image storage is all cloud-based and secure.

“Privacy is the most important thing to us,” says Anderson, who is also the marketing director for Kinetic Legacy. Adds Devine, “We are safeguarding memories, and we take that seriously.”

While Andelin is user-friendly for all ages, Anderson says the older generation was top-of-mind when it came to designing features of the app.

“The text size and the size of the buttons were taken into consideration,” she says. And as the team is continuing to perfect Andelin, Anderson says they are striving to make the user experience as easy as possible, and welcome email feedback.

To further lean into the importance of storytelling, in October 2018, Devine, Anderson and Holmberg decided to launch a podcast called ‘Legacy Matters’ where they invite a guest into their northeast Minneapolis studio for a free-ranging conversation. They recently released their 100th episode.

“Just as the app shares stories of people and places, we’d like our podcast to do the same,” says Devine. “We invite members of the community so that we, and our listeners, can find out who we are living with here.”

Guests have included organic farmers, firefighters, writers, media personalities, musicians, community activists and others, with notables such as explorer Will Steger and musician Chan Poling of The Suburbs, a popular Twin Cities band.

The hosts’ technique is a bit unusual. “We purposely don’t do much research. There are no notes or scripts. We look at it as a “kitchen table conversation” — like these people are new neighbors who just moved in next door and we’re inviting them in to get to know them a little better,” says Devine.

Listening to a podcast (all episodes are available on podcast channels including iTunes, Stitcher and Listen Notes), it’s easy to pick up on the chemistry between the three hosts, and before long, the guests seem at ease as well.

“We’ll often hear from people that the experience was one they weren’t expecting or that we got them to share something they had never shared,” says Holmberg.

For Holmberg, Devine and Anderson, everything comes down to the power of story, and including the word ‘legacy’ in their company name was of primary importance.

“History looks backward, but legacy is what you leave for the future,” says Devine. “It’s how people in the next generations will be able to know more about you.”

Julie Pfitzinger is the editor for Next Avenue’s lifestyle coverage across the Living and Technology channels. Her journalism career has included feature writing for the Star-Tribune, as well as several local parenting and lifestyle publications, all in the Twin Cities area. Julie also served as managing editor for nine local community lifestyle magazines. She joined Next Avenue in October 2017.