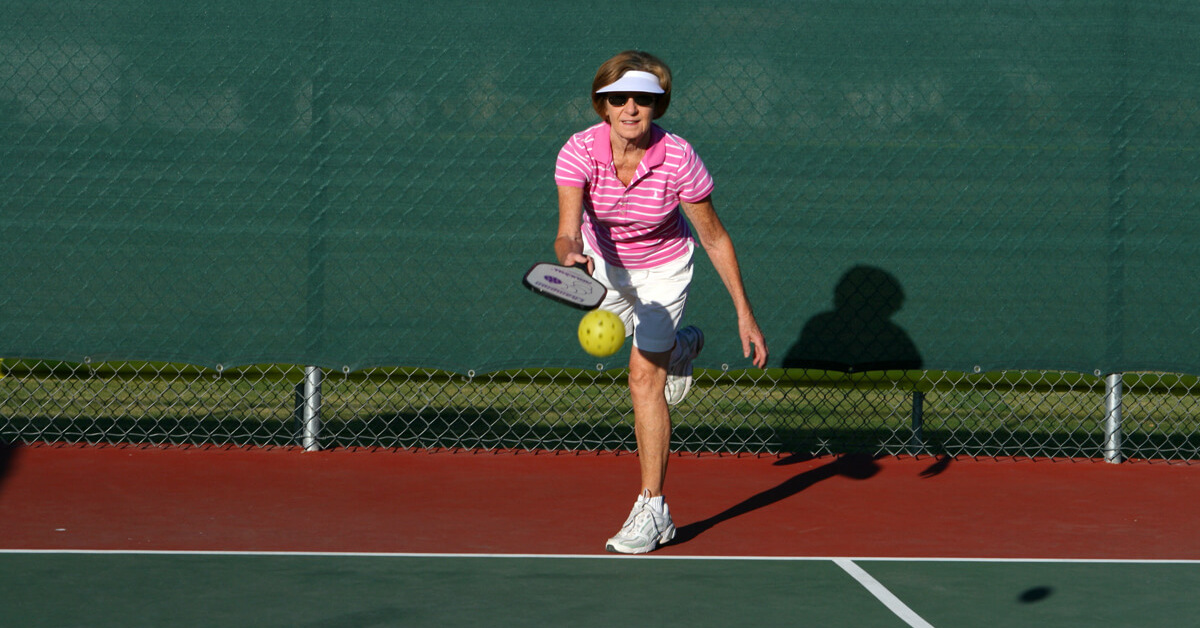 By Rosie Wolf Williams for Next Avenue

Three years ago, Oro Valley, Ariz. resident Sherry Circle felt completely isolated from the world. She was diabetic and weighed more than 300 pounds. “I was an athlete in high school,” explains 63-year-old Circle, who had to wear a CPAP machine at night for her sleep apnea. “I lost all that because of bad choices. I had no purpose in life.”

Circle’s uncle asked her if she would consider playing pickleball. “I said to him, what the heck is pickleball?”

Her uncle instructed Circle to go to his garage and get his paddle. He told her to take the paddle to the local recreation center in Oro Valley and ask someone to teach her how to play.

“So, I walked over on a Thursday morning and held up my paddle,” says Circle. “I said, ‘My uncle said you guys would teach me how to play this game.’ I haven’t stopped since.”

Pickleball is quickly gaining ground as one of the most popular team sports for older athletes in North America and is a huge hit in many retirement communities. It was created on Bainbridge Island, Wash. in the summer of 1965. Former State Representative Joel Pritchard and his friend Bill Bell returned from a golf game and found their families were bored and in need of an activity.

They could not find a complete set of racquets to play badminton. So they improvised a game by “pickling together” items from different sports, using a Wiffle ball, ping pong paddles and a badminton net. The game was an immediate hit.

Another friend, Barney McCallum, was introduced to the game the following weekend. The three men eventually crafted a larger paddle out of plywood, and created a set of rules for their new game, with the core idea that all members of a family could play together.

The sport took off by word of mouth, and by 1990, pickleball was being played in all 50 states.

In 2015, the Sports & Fitness Industry Association (SFIA) called pickleball “the fastest growing sport in the United States.” Today, clubs can be found across the United States and Canada, with many new international ones forming around the world.

The rules are simple, beginning with a requirement that the ball must bounce on each side of the net before players can hit the ball in the air or on the “volley.” Games are scored to 11 points. As in volleyball, a point can only be scored by the serving team.

“It is [a very] social activity because pickleball is very interactive. Some sports are not,” says 71-year-old Bob Nibarger, board member at large of the USA Pickleball Association (USAPA) and tournament director for Carolina Courts and the Concord Tournament Series.

“Lawn bowling, for example, there’s not a lot of communication that goes on among players, but when playing pickleball you’re constantly busy every second,” Nibarger says. “You’re sending the ball or you’re receiving the ball, you’re running or jumping. We have kids playing as early as six years old, and people up into their 90s. I’ve seen great-grandparents playing with grandparents playing with parents and kids and grandkids. It’s a multi-generational type of sport.”

Nibarger tells a story of a husband and wife who play pickleball together. The husband was diagnosed with Parkinson’s Disease. “He still plays pickleball every day. It’s his guiding light, what keeps him going,” he says.

Nibarger has also seen older people who have lost a spouse and found some solace in playing pickleball. “Typically, a person will go into a deep depression, they don’t know where to turn. With pickleball, they’re active, they’re physical and they get this social network going. It changes their outlook on life,” he says.

Carol Michaels is the founder and creator of Recovery Fitness® and co-author of Exercises for Cancer Survivors. “Older adults oftentimes are isolated due to death of a spouse, divorce or retirement. Additionally, as people age, they may have to move to a new area where they do not have friends, due to their financial or family situation. To add to potentially isolating changes, the older population may have health issues which cause them to stay home,” Michaels says.

In a new report developed with AARP Foundation support, researchers examined existing data to estimate the prevalence of loneliness among adults aged 62 to 91. The report found that 19 percent of older adults experience relatively frequent loneliness. Pickleball, as well as other team sports, can offer the benefits of exercise, but there are mental benefits, too.

“Particularly for aging populations, psychological well-being is vastly improved through connections with others,” says Carla Marie Manly, a clinical psychologist and author of Joy from Fear: Create the Life of Your Dreams by Making Fear Your Friend.

“When you couple physical exercise with the emotional connection provided through team sports, the body, mind, and spirit all thrive. There is an increase in each person’s sense of joy and overall well-being,” she says. “Team sports can bring about a sense of vitality, camaraderie, and sheer fun; this radiant type of energy can halt aging worries in their tracks.”

Peter Popovich, 66, owner of 3P Coachsulting in Charlotte, N.C., had been involved in sports since high school, playing tennis, racquetball and badminton in competitive events. As an older adult, he continued his passion for competitive sports by serving as an ambassador for the North Carolina Senior Games. He was asked to promote an exhibition game of a sport he hadn’t heard of — pickleball — and was immediately hooked.

“It is a blend of tennis, badminton and table tennis, and it was so different, yet so similar to the other racquet sports,” he says. “It’s very easy to have a sense of competence, and there is an ease of entry. And with pickleball, there’s such a sense of community.”

Para-Pickleball, or wheelchair pickleball, was officially recognized as a competitive branch of Pickleball by the USA Pickleball Association in 2016.

“I was playing the tournament up in Portland, Maine last year, and in the lobby there was a lady [in a wheelchair] who used to be a racquetball player and tennis player,” Popovich says.

Popovich told her she could play pickleball, but she didn’t believe him. “I just put a paddle in her hand, and kneeled in front of her, and we just tapped the ball back and forth to each other. The smile on her face, was to me, just priceless. She can’t play racquetball other than in her mind, she can’t play tennis other than in her mind. But she could tap this plastic ball, the pickleball, back and forth with me. It was so rewarding to see the smile on her face, to see that competitive twinkle come into play.”

Michaels says that orthopedics issues are common among adults over the age of 60, and pickleball can be played by people with them. “Participation in a gentle sport such as pickleball has been a game changer. Pickleball is easy on the body; there is no overhead motion, and the court is small,” she says. “My clients over 60 who have participated in this sport have remarked that is has helped to decrease depression.”

But Popovich warns that players must be advised of safety on the court, since older adults are not able to move in the same way they did when they were younger. He stresses that they should use their quads to stay low, make sure they don’t run backwards and turn and slide with caution.

“An ambassador of the sport will make sure [newcomers] will experience pickleball without getting themselves into trouble,” he says.

Sherry Circle lost 115 pounds in 7 months, attributing the larger percentage of that loss to regular pickleball play. She competed in the 2018 Margaritaville Pickleball National Tournament (winning the bronze medal with a younger partner in the Womens 3.0, 55-59 age group) and is studying to become a pickleball referee.

Circle no longer takes diabetes medication, and is completely off the CPAP machine. “I thought I was going to be dead. I was depressed and unmotivated,” she says. “But now, I believe that we have a tripod that we live on. Healthy body, healthy mind, healthy finances. I was missing the segment of exercise. Now, I pop right out of bed. The journey has been incredible and beyond amazing!”

Rosie Wolf Williams is a freelance writer whose work has appeared in USA Weekend, Woman's Day, AARP the Magazine and elsewhere.@alwaysrosie