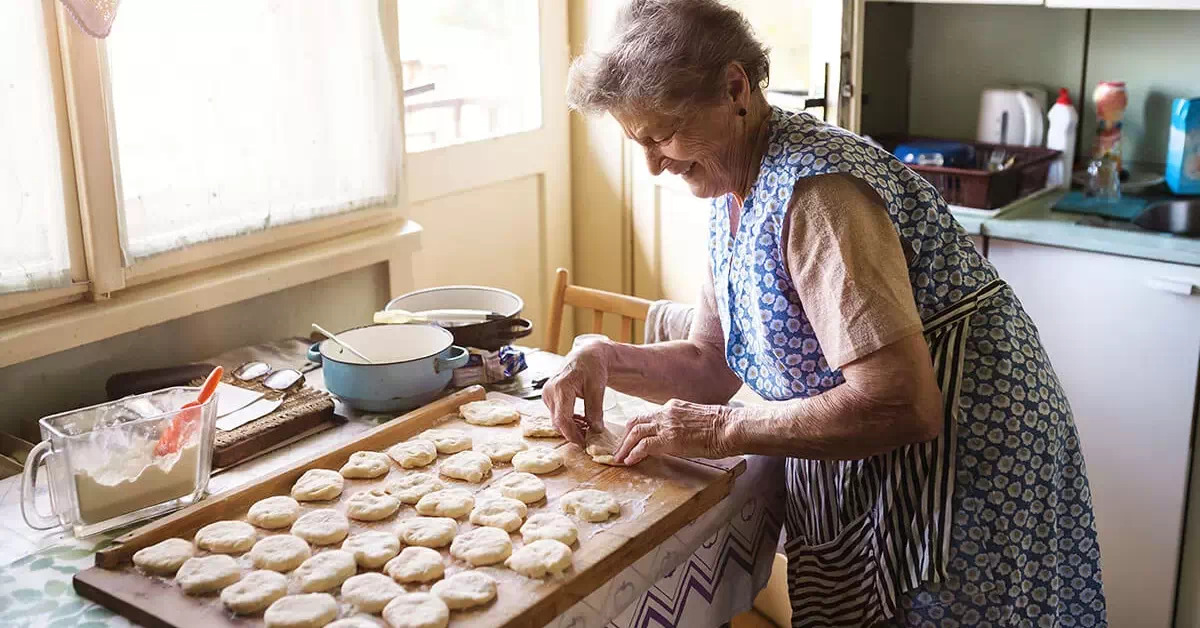 Pass Along Traditions With a Family Cookbook

By Brette Sember for Next Avenue

Nearly everyone can share a favorite food memory; whether it’s all of the components of the family’s traditional Thanksgiving meal or Grandma’s molasses cookie recipe or Dad’s famous waffles. Gathering these beloved memories together can be a true labor of love.

A family cookbook preserves special family recipes, passing them down to future generations. Family cookbooks are popular for family reunions, weddings, and holidays.

Virginie Martocq, owner of HeritageCookbook.com, says they are also common “when someone in the family has passed, as a way to remember all the times that were shared at that person’s table.” Cookbooks are also made as graduation presents or for children setting out on their own; “it feels like bringing home with them,” Martocq says.

Interested in creating your own family cookbook?  Here are some suggestions:

Creating a family cookbook is a real project and for success, treat it seriously. Chip Lowell co-owns The Family Cookbook Project and says the first step is choosing a “go-getter” as the editor who will get the project going, ask for submissions, choose recipes and get the book published.

Next, determine the number of recipes you’re aiming for. Lowell says 100 to 150 is a good number. Set a deadline for submissions. Invite family to participate and send deadline reminders.

Michelle Clark, 59, of Wellfleet, Mass., created a family cookbook as a wedding gift for her brother and sister-in-law and invited the wedding guests to contribute recipes. She set a deadline, but had to extend it by a month for procrastinators.

Deciding which recipes to include can be challenging. Lowell says, “Family favorites that folks always ask about are typically the first choice.”

Food historian Sarah Wassberg Johnson suggests prioritizing recipes from deceased or older family members. “There’s nothing sadder than a ‘famous’ family recipe that dies when the person who made it does,” she says.

She also recommends including recipes family members make frequently, as well as those that are featured at special meals like holidays.

“Cookie or other dessert recipes are especially good, because people are more likely to follow an exact recipe when it comes to the science of baked goods,” Wassberg Johnson says. “The ones to avoid are the super-fancy or trendy recipes that you only made once or twice or are very complicated.”

Martocq notes that most family cookbooks are heavy on baked goods, but says that’s not a bad thing. “A family cookbook should really be a reflection of the foods you love best, so it’s not important for it to be well-rounded,” she says.

Duplicate recipes can pose a challenge. Clark had several people send in duplicates and she had to decide which person to credit.  “I usually gave credit to whoever had fewer recipes,” she says. Another option is to list everyone who submitted the recipe.

Sharing Stories of the Recipes

A simple way to organize your book is by food type, but don’t be afraid to get creative.

Ellen Hester, 73, of Monroe, Ga., began her family cookbook when her daughter requested recipes from her childhood. Hester gathered recipes and started to write the stories that went with them. “The stories began flowing, and I recognized a pattern,” she says.

Hester told the stories in chronological order, which coincided with the places they lived.  She named each story after where they lived at the time: “Table in Cairo,” “Table in Albany,” “Table in Monroe.”  She placed the recipes in a separate section (sorted by type) and cross-referenced their pages whenever she mentioned a recipe in a story.

Other Things to Include

“The cookbook is really family history — it’s not all about the food itself,” says Lowell. So, view the project as capturing family history. He suggests adding “personal notes about the recipes and why they are important to the people who contributed them.”

Johnson recommends including photos, “especially photos of previous generations, which can put a face to the recipes.” Another idea is to include photos of heirloom recipe cards, so Grandma’s handwriting is preserved.

Creating a memorable cover will help make the book special. Hester has an artist friend who “volunteered to paint my hands tying an apron to be the cookbook cover. It was truly the icing on the cake,” she says.

A family cookbook can be digital, print or both. Lowell believes, “having a physical cookbook makes the family history come alive so much more than just a database of the same content.”

Clark created print and online versions. “We did not include pictures in order to save money on printing, but there are many photos in the online version. Everyone in the family loves it and continues to use it and they’re continuing to share new recipes in the online format.”  Seeing new recipes accumulate online has Clark thinking about doing a second print volume.

Pricing depends on your method. A digital version (Word document, PDF or blog) is free if you make it yourself, or low cost if you use a cookbook site.

Lowell says the price for print books depends on the number ordered. His average customer orders 29 books of about 160 pages, for $17 per book.

If you want to DIY a print book, print the pages out at home or at a copy shop and get the book stapled with a cardstock or laminated cover. Lowell recommends a spiral coil binding. “It’s inexpensive, the book opens and lies flat on the counter,” he says.

There are also options for heirloom books — hardcover bound books with glossy pages. Johnson prefers erring on the side of usefulness instead so people will actually cook from the book, instead of letting it sit on a shelf.

Working out the number of copies to print can be tricky. Lowell recommends ordering 10% more than you think, since people will see the finished product and want one. Hester originally had 20 copies made, but ended up ordering 100 more because friends wanted them.

There are bound to be a few hiccups along the way. Lowell says it’s unrealistic to assume everyone in the family is going to want to participate. Put the call out and then work with the recipes you receive.

Don’t be a perfectionist. he says. “Family cookbooks are living documents that are currently evolving just like the families themselves,”  notes Lowell. You can always create another volume later.

A common problem with older recipes is deciphering vague descriptions or measurements (such as a pinch of this or that). Martocq advises that “To really capture the spirit of Grandma’s recipe, you should leave the wording as she would have. But maybe in the prep instructions, or in notes, you can add a little more information about what works in your experience. Recipes are living things, so adding your comments just gives it more layers.”

Brette Sember is the author of many books about divorce, child custody, business, health, food, and travel. She writes online content and does indexing and editing.