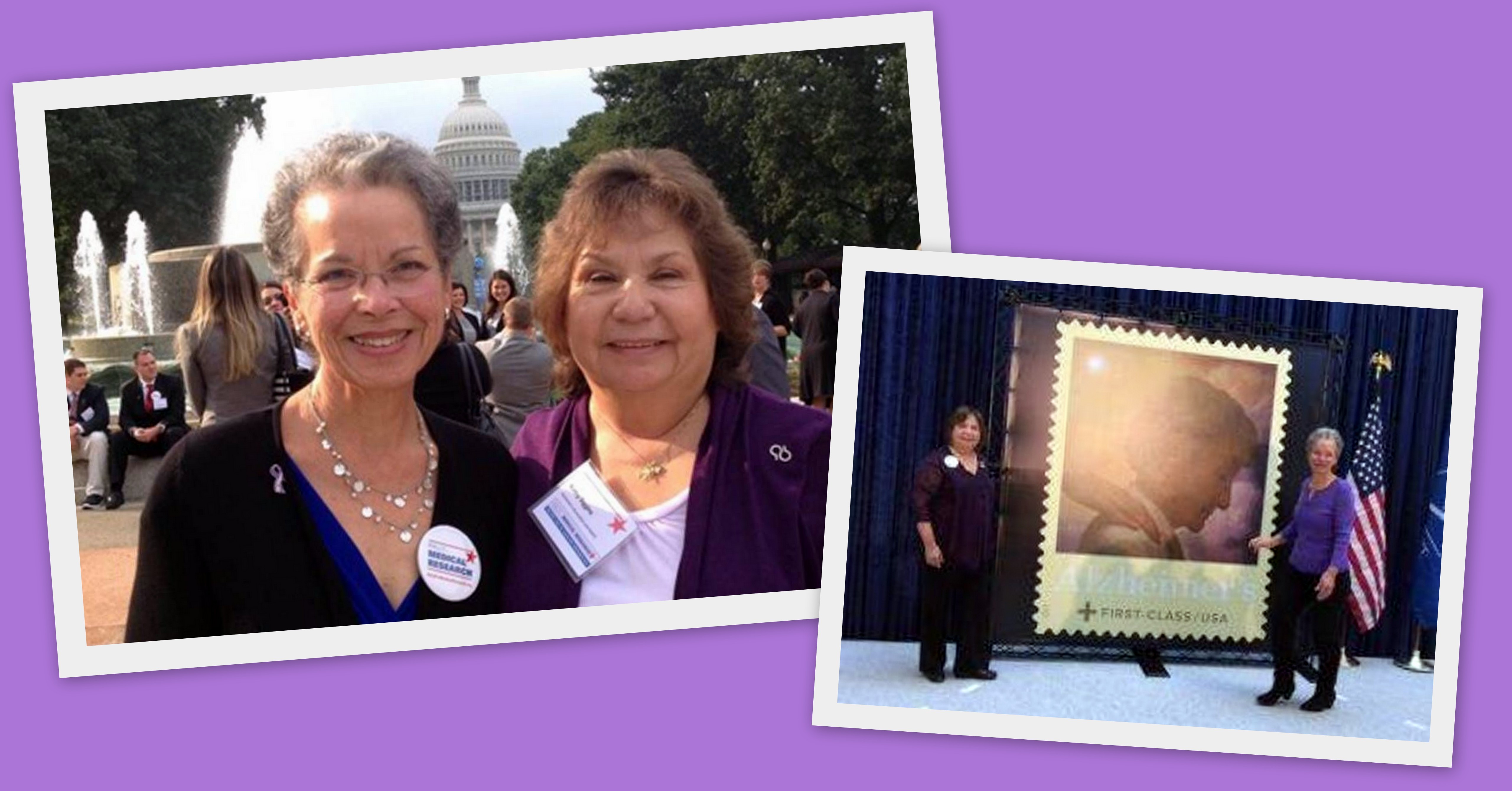 Meet the 2 Women Behind the Stamp to Stamp Out Alzheimer's

By Paula Spencer Scott for Next Avenue

On Monday, October 5, Lynda Everman, 74, launched a card ministry, writing everyone on her contact list to say how much they mean to her in these isolating times — and enclosing a stamped card so they can do the same for someone in their circle. A few states away, Kathy Siggins, 72, was pushing postage stamps from an Alzheimer’s information table at her local Walmart.

Both women are celebrating today’s rebirth of their Alzheimer’s Disease Research stamp.

Known as a “semipostal,” it’s a special kind of fundraising postage stamp costing 65 cents (a dime more than a regular first-class stamp), with net proceeds going to the National Institutes of Health for Alzheimer’s research.

If all the stamps printed are sold, they could raise $50 million for the work of Alzheimer’s scientists.

Without these two self-described introverts turned advocates, who’d each lost a husband to early-onset Alzheimer’s and channeled their grief into their Postal Service campaign, the stamp might never have been issued.

The U.S. Postal Service first printed and sold the Alzheimer’s stamp from 2017-2019, raising $1.06 million in the first year — pennies at a time — from the sale of 8.2 million stamps. Sales were halted due to Congressionally mandated rules for semipostals. The new stamp will be on sale through 2027; reinstating a semipostal stamp is a rare event.

Siggins met her second husband Gene at the U.S. Postal Service headquarters, where they both worked at the time. Marrying in 1978, they happily raised their blended family in the Mt. Airy, Md., house where she still lives. But on an annual drive to Florida in the mid-‘80s, Gene became horribly confused about the familiar route.

He then began repeating stories and struggled with bill paying as well as work tasks. Finally, a doctor diagnosed him with Alzheimer’s.

“I’d never heard that word before,” Siggins says. Gene was 59.

Getting Her Family Onboard

“Mom, why do you want to open up our life to everyone?” asked her son Michael. “Do you really think you, one person, can make a difference?”

“I don’t know,” answered Siggins, who’d quit her job at a frame shop to care for Gene. “But I do know that if we don’t talk about this disease, no one will ever know what it’s like.”

When Gene died in 1999, Siggins told the kids, “There’s a reason God has taken me on this journey — it’s not supposed to die with Gene.”

Longing to do something big, she considered bicycling across the country to raise Alzheimer’s awareness. “So, I went to the gym. After five minutes on a bike, I thought, ‘Whoa! I’m going to have to rethink this!’”

During a brainstorming session at an Alzheimer’s advocacy forum, someone mentioned the Breast Cancer Research stamp. Launched in 1998 by a Congressional mandate, it was the first semipostal. (Still available, it has raised $91.4 million for breast cancer research.)

“Though I once worked at the post office, I’d never heard of such a thing,” Siggins said. “I wanted that for Alzheimer’s.”

An Intense Campaign for an Alzheimer's Stamp

At that time, in Maryville, Tenn., retired human resources consultant Lynda Everman was also aware of the breast cancer stamp’s success. She liked that buying the stamps helped fight this killer.

In 2009, Everman had made the excruciating decision to place her second husband, Richard, in an assisted living facility due to Alzheimer’s; her father had it, too.

“When I die, I know I’m going to heaven because I’ve already been in hell,” says Everman.

Inspired by the breast cancer stamp, she then began an intense campaign writing a Postal Service group known as the Citizen’s Stamp Advisory Committee, her senators and former presidents to demand an Alzheimer’s stamp.

“I thought they’d love it,” she recalls. ”I didn’t know anything!”

A month after Richard died in 2012, Everman asked at her post office for a sheet of “Alzheimer’s stamps.” She says: “I knew full well one didn’t exist; I was just frustrated and being a smart aleck.”

To her surprise, the postal clerk told her that one had been retired a few years back, saying: “Maybe you can find some on eBay.”

Googling around, Everman discovered the short-lived 2008 Alzheimer’s Awareness commemorative stamp. A commemorative, unlike a semipostal, is usually printed in small quantities to honor people, events and issues (like Elvis, Earth Day, AIDS Awareness).

Everman also found a newspaper article mentioning the widow who’d started a petition for that Alzheimer’s stamp and was now pushing for one that would raise money for research.

Back in 1999, Siggins had learned the Postal Service receives a daunting 50,000+ stamp suggestions a year. An Alzheimer’s one? Not enough public interest, she was told.

So, Siggins launched a petition to prove otherwise.

“I was going to fairs, car shows and carnival grounds setting up my little table to get people to sign it,” she says.

Things looked up In 2000, when the new Semipostal Authorization Act granted the Postal Service permission to issue five fundraising stamps for causes of national interest over the next decade. The deadline for proposals was August 31, 2001.

Siggins collected 12,000 signatures and got her Congressional representatives, Democrats Sen. Barbara Mikulski and then-Rep. Ed Markey, to sign on.

After 9/11 happened, special Heroes of 2011 stamps to raise money for victimized families took precedence. After that, Congress enacted legislation for a Stop Family Violence stamp. Because rules limited how many semipostals could circulate at one time, the 2000 law expired without creating any.

But in a nod to Siggins’ ongoing efforts, the Postal Service approved the commemorative for Alzheimer’s awareness in 2008. It felt like a consolation prize; she wanted the kind that would raise money.

That evening, the kindred spirits talked caregiving and stamp dreams for over two hours.

“She knew the Postal Service, and had developed relationships with Congressmen, but hadn’t amassed a national voice,” Everman says.

From 2012 to 2017, Siggins and the woman she calls “an Energizer bunny” blitzed social media, collected 84,000 signatures and tapped their networks at the Alzheimer’s Association (Siggins) and Us Against Alzheimer’s (Everman). Together, they hand-delivered appeals to all 60 members of the Bipartisan Congressional Task Force on Alzheimer’s, seeking supporters to introduce legislation to revive the Semipostal Act.

“You know what you did?” asked Rep. Elijah Cummings, an early champion, as the women stood onstage with him at the 2017 unveiling of the new Alzheimer’s stamp. “You took your pain and turned it into a passion to do a purpose.”

Advice for Others With Passions for Change

They persuaded legislators to petition then-Postmaster Megan Brennan not to destroy the remaining stock (as is custom for semipostals) when the stamp was retired in November 2019.

Everman’s advice to others with a similar zeal: “You might not accomplish what you set out to do, you might get sent in a different direction, but if you feel there’s something you need to do, do it. It doesn’t matter how young or old you are.”

“The hardest thing now is getting people to know the stamp is out there,” Siggins says. “You’re contributing to Alzheimer’s research simply by buying a stamp. How simple is that?”

(To purchase the Alzheimer’s semipostal stamp, you can go to the U.S. Postal Service website, call 800-STAMP24 or go to your local post office.)

Paula Spencer Scott is the author of more than a dozen books, including Surviving Alzheimer's: Practical Tips and Soul-Saving Wisdom for Caregivers, a series of interactive journals and health/family guides with doctors at Harvard, UCLA and Duke. Her latest is When Your Aging Parent Needs Help (January, 2021) with geriatrician Leslie Kernisan. A longtime journalist and former Woman's Day columnist, she's also an Alzheimer's and caregiving educator.