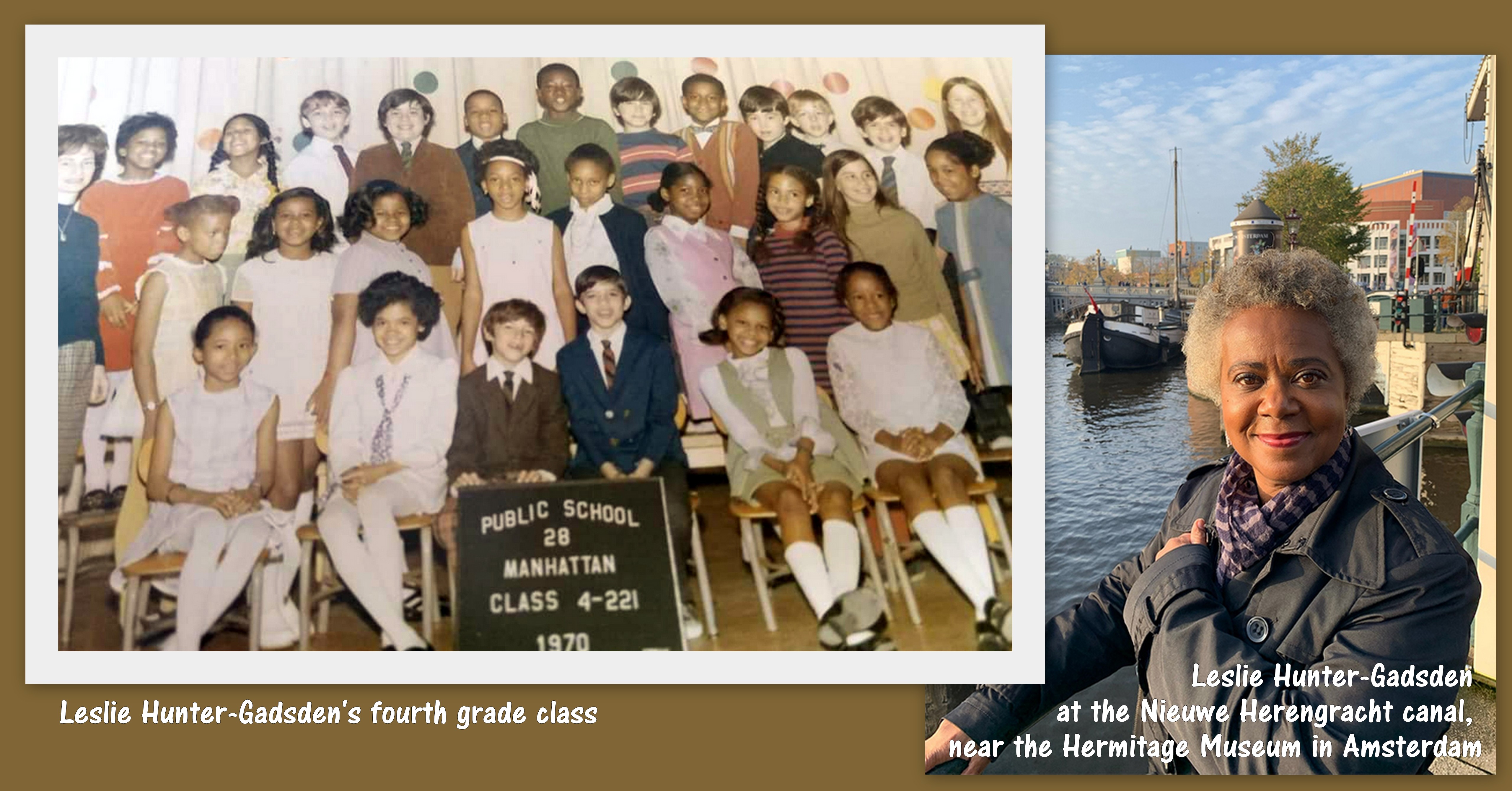 Life Lessons From a Favorite Teacher

By Leslie Hunter-Gadsden for Next Avenue

When I was in the fourth grade at P.S. 28 in Manhattan, between September 1969 and June 1970, my class learned about both Greek mythology and the story of Anne Frank from our school principal, Mr. Benjamin Eilbott.

When his schedule permitted, Mr. Eilbott would come into our class, wearing slacks, a shirt with the sleeves rolled up and a tie, carrying either a paperback copy of “The Diary of Anne Frank“ or a collection of Greek mythology, sit down, push his horn-rimmed glasses up on his nose and start reading to me and my classmates.

We all felt special when Mr. Eilbott would visit. We knew the reason he spent time with us was that we were Mrs. Lomner’s 4th Grade I.G.C. class, and we understood that acronym stood for “intellectually gifted children.”

In other words, we were a multicultural class of smart kids in the Sugar Hill section of Washington Heights who earned some extra attention from the principal.

An Education Beyond the Curriculum

Mr. Eilbott came to give us an education that was not in our New York City 4th grade curriculum.

He shared his knowledge of the world with nine and 10-year old students who would never forget his anecdotes or how to figure out the meaning of a word if you understood the Latin or Greek root of it.

While I loved learning about the adventures of characters in Greek mythology, hearing about how Anne Frank and her family had to hide from the Nazis in Amsterdam during World War II really had me spellbound. Perhaps it was because everything was being told from the perspective of a young girl who liked to write, just like I did.

Except for the fact that I was a Black girl growing up in New York City’s Washington Heights neighborhood, not German-occupied Amsterdam, I felt a connection to Anne Frank, as I know many readers have. I was old enough to understand that Black people in America were marching for equal rights and that racism in any time period could destroy lives.

Fifty years after those engaging childhood read aloud sessions and discussions, I have to believe that as Mr. Eilbott looked into our sea of black, brown, tan and some white faces, he knew that he was making us think about how to fight injustice, as well as to believe in amazing occurrences as he shared these books with us.

Another reason why “The Diary of Anne Frank” came alive for me and my classmates, was that Mr. Eilbott added his personal anecdotes about living in Europe as a Jewish child during the same period that Anne was living there, and told us how and why his parents decided to leave Germany before his family could be put in a concentration camp.

He told us about being chased by the “Nazi version of Boy Scouts” every day after school, which was why he became such a fast runner.

We laughed, because our principal was known to chase down and catch a misbehaving student, as well as win a relay race in the school yard.

Mr. Eilbott, who was medium height, had a slender build, dark hair with a receding hairline and an easy smile, told us that when his family decided to leave, they had to do so in secret and leave most of their belongings. Friends of his parents thought they were “overreacting” to Hitler’s politics.  He said his family was sad to leave, but that his parents feared things would only get worse if they stayed.

As Mr. Eilbott read segments of Anne’s diary, the day-to-day life of all those hiding in the annex in Amsterdam came to light. We learned of their fears, their hopes and their interactions.

Anne, her sister Margot and Peter van Pels (renamed Peter van Dam in the diary) were all teenagers. Their parents and Mr. Pfeffer were adults. We learned about everything from Anne’s perspective and were reminded that she was still a kid, five or six years older than us fourth graders.   Anne was 13 when they went into hiding and 15 when they were discovered by the Nazi Gestapo.

I became fascinated with the idea of writing down what happened in everyday life and shortly after Mr. Eilbott finished reading “The Diary of Anne Frank” to our class, I decided to start keeping my own diary. Since Anne had written all her entries to her alter ego “Kitty,” I decided to address my entries “Dear Barbie,” being a big fan of Barbie dolls.

I had not thought of that early diary, or Anne Frank, for many years. But in October 2019, my husband and I traveled to Amsterdam for a vacation, and as we poured over guidebooks, we decided that visiting the Anne Frank House was a “must see” during our visit.

I was not prepared for the emotional pull that finally seeing the place where Anne and her family hid would have on me. As we passed a section where some of Anne’s written dreams and hopes were displayed, my pulse quickened when she shared her desire to continue writing and maybe become a journalist, which was something I had also dreamed about, and eventually achieved.

Those words took me back to my 9-year-old self, and made me remember other reasons why I had felt a connection to Anne.

Walking through the “secret passage” past the bookcase that moved to reveal what became the 1942-1944 hiding place for Anne’s family and members of the Van Pels family and Fritz Pfeffer, I was struck by how tight the living area was and how difficult it must have been to be quiet so that no one working downstairs in the warehouse was aware they were upstairs. They could not go outside and had to stay away from the windows, use “black-out” shades and wait until the warehouse workers’ lunch break or the evening to move around a bit more.

Grateful for His Meaningful Lessons

One of the walls in the hiding place featured newspaper and magazine clippings of movie stars of the period who Anne liked. It made me think of how my teenage bedroom walls were adorned with posters of my favorite R&B singing groups, like The Commodores and Earth, Wind & Fire.

As the tour slowly passed through all the secret living space, Peter’s attic room was revealed to have the most access to sunlight, which I’m sure made it one of Anne’s favorite spots in the annex.

Seeing the secret annex in person for the first time made me remember how sad I was to learn, after Mr. Eilbott read us the last passage, that the only survivor of the Frank family was Anne’s father, Otto Frank, who shared Anne’s diary with the world.

Anne Frank’s wit, wonder and curiosity amid the terrible fear of being discovered has lived on to motivate all who read her words.

Stepping out of the house to view one of Amsterdam’s beautiful canals, I felt grateful for Anne, her diary and Mr. Eilbott.

Leslie Hunter-Gadsden is a journalist and educator with over 25 years experience writing for print and online publications. She has covered business and a variety of topics for several consumer and trade publications and media outlets including Next Avenue, Black Enterprise magazine and Sisters from AARP newsletter.