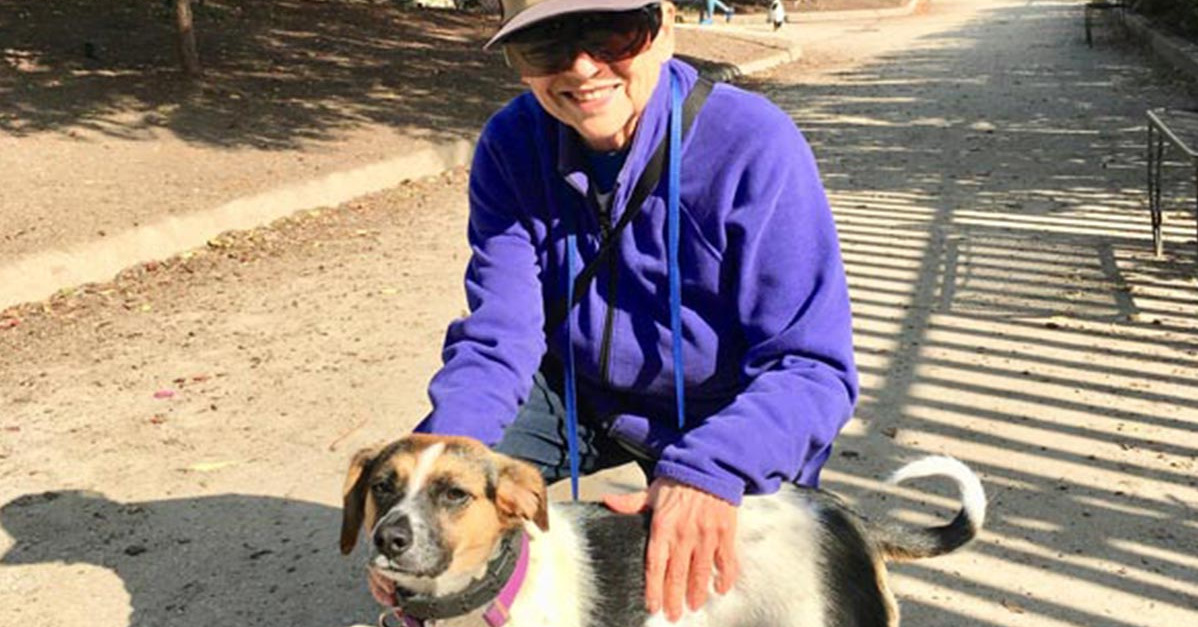 Lessons in Bravery From a Dog and Her Owner

By Elaine Soloway for Next Avenue

Doris pulls me ahead; I trot to keep up. Her tail is sailing, as if atop a mast. I take this as a sign that my 1-1/2 year-old Terrier/Jack Russell mix is happy and brave. Well, slightly braver than she was three months ago when I adopted her from a shelter.

As for me, a certified senior at 81, I check my Apple Watch and note my rising heart rate. “Good,” I think to myself — exercise and companionship from one 25-pound bundle.

The more time I spend with Doris, the more I understand that I have been granted another benefit from our union; I have become braver, too. Unlike Doris’ buoyant tail, I have no bodily evidence of this boon; just examples.

Finding Courage at the Dog Park

It’s 5 a.m. in Chicago’s River North neighborhood; dark, quiet, with only a handful of dog walkers, runners and members of a nearby health club appearing and fading from view. Our target is a dog park, two blocks from our studio apartment. It will likely be deserted at this early hour, but because lights and cameras dot our path, Doris and I are not distressed.

Like always, during our other visits to this park at more reasonable hours, it takes a few minutes to unlatch the iron gate that prohibits the dogs from escape. As the bars squeak and clang, I feel as if we have slipped backward in time, like arena warriors about to enter some dire competition. The image doesn’t frighten me; it, in fact, builds my courage.

There is a second locked gate a few feet in, which I more quickly open because I know my pooch is eager to do her bathroom business and perhaps find a pal to chase among the hills and trees.

While she is off-leash, I take a seat on one of the metal chairs, keep an eye on her and then contemplate the change in dog and owner. Along with Doris’ adoption papers, she toted a list of fears from her puppyhood in Florida and residences in various shelters. Men, trucks, construction workers, bicycles, scooters, baby strollers, traffic and other big city features kept her tail tucked and hidden. Our daily walks were punctuated by pauses as she confronted each terror.

Now, after four walks a day during these three months, while we still face these disturbances, her fear has lessened. Often, she passes one of these abominations, and hardly gives it a glance from her lovely lashed eyes.

As for Doris’ owner, my fears began in childhood. Like many who grew up in the 1940s playing on the sidewalks of old neighborhoods, I at first capered happily. Roller skates (with keys), jump ropes and games of Ring-O-Levio kept us kids giddy until last call to get inside.

Then something happened that shattered that nostalgic picture, leaving me, and other young girls of the time, to cope with lasting trauma. Perhaps little Doris’ fears are also remnants from her early life.

The onset of my anxiety began January 7, 1946 when six-year-old Suzanne Degnan was discovered missing from her first-floor bedroom in Edgewater, Chicago. A ladder was found outside her window. Eventually, police discovered Suzanne’s dismembered body, a block from the Degnan residence.

After sensational headlines played out for weeks, with vivid descriptions of the child’s scattered body parts, William George Heirens, 17, was convicted of the murder of Suzanne Degnan and two other women. (Heirens died in 2012, at the age of 83, after a lifetime of professing fabricated evidence and his innocence.)

Now suppose if at that time, you were an 8-year-old girl who slept on the side of the bed closest to the window, like I did. Our three-room apartment was one floor above our grocery store, easily approachable by a ladder. Although my 11-year-old brother slept on the other side of the bed (remember, this was the 1940s), his presence helped, but didn’t mollify my nightly fears.

‘Bonded by Our Mutual Trust’

As I grew older, through schools, marriages, parenthood and careers, I became more confident. But this self-assurance never extended to the dark of night. An early riser, I’m happy to be the first to leave a party so I can tuck in by 8 p.m. From the cocoon of my 27th floor apartment, I calmly view the city lights.

At this 5 in the morning, the darkness and silence are as deep as if it were midnight. Doris and I, with our childhood experiences stored high on a shelf of our memories, walk bravely together; one with tail flying, the other with heart bouncing, bonded by our mutual trust.

Elaine Soloway is a PR consultant, writing coach and tech tutor, and the author of Bad Grandma and Other Chapters in a Life Lived Out Loud and Green Nails and Other Acts of Rebellion: Life After Loss. The Emmy Award-winning television series 'Transparent' was created by Elaine Soloway's child Jill and inspired by their family.