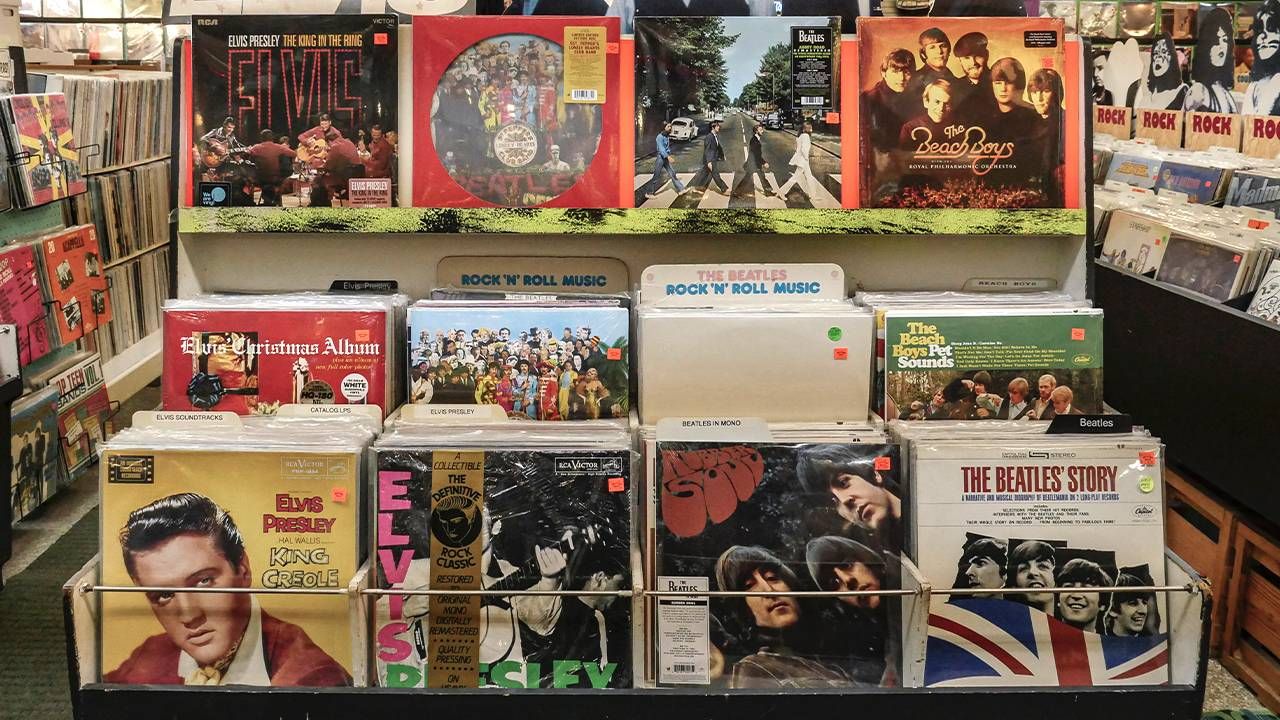 Is There Big Money in Your Vinyl Records?

By John Marshall for Next Avenue

Odds are, you have some rock and roll vinyl records or might see ones for sale at a yard sale. Wondering whether they're worth much? Some just might have a value of hundreds or even thousands of dollars. But others, not so much.

As someone who's tracked record values and hosted radio shows about them for many years, I can tell you this: the value of a vinyl record from the 1950s, 1960s or 1970s is based on a few key things: the collectability of the recording artist; the genre of the music; the rarity of the album and the condition of the record. Collectors always want an original issue, rather than a reissue.

I've done many radio shows where several callers have had records worth more than $1,000. When I'm on Jim Bohannon's syndicated radio show, we always find callers with records valued at $100 or more. But I'd say the vast majority of callers have records in the $25 price range. The chances for bigger value are for vinyl records from the 1950s and 1960s.

Rock and Roll Records With the Most Value

When it comes to value in vinyl, there are five main genres. Most of the value is in rock and roll, followed by blues, soul, jazz and country.

"Doo-wop" (groups like The Flamingos, The Five Satins and The Platters) and Rockabilly (exemplified by Elvis Presley, Jerry Lee Lewis, Eddie Cochran, Gene Vincent and Carl Perkins) can be worth the most among rock and roll vinyl recordings.

Also promising these days: Surf music performed by acts like The Beach Boys, Jan & Dean, the Ventures and Dick Dale and Motown artists like The Supremes, Marvin Gaye, Smokey Robinson, The Four Tops and The Temptations.

Some records from The British Invasion in the mid-'60s, by such stars as The Beatles, The Rolling Stones, The Dave Clark Five, can be very valuable, too.

Keep in mind, however, that the same record can have a vastly different value depending on the record company that issued it. For example, one of the best-known examples of Surf music is the instrumental "Wipe Out," by The Surfaris. Most copies of it are on the Dot label and worth no more than $10, but ones on the DFS record label go for up to $3,000.

Vinyl Records by The Beatles

But keep in mind that particular pressings of the same album can have vastly different values, depending on their particulars.

In most cases, the value of an album is split evenly between the vinyl and the cover. However, with a 45, there are two separate values: one for the record and one for what's known as the picture sleeve.

Many 45s came with a picture of the recording artist on the sleeve. And by themselves, the picture sleeves can be worth more than the records.

You might not know it, but there are only established values for records issued in the U.S.A. Records from overseas — imports — have no established values. As a rule, collectors value imports up to 30% less than their counterparts released in the states.

What to Know About Imports and Mono Vs. Stereo

The photo on an album cover, font of the print and speed of the album recording can sometimes matter greatly for value, too.

In 1966, Dunhill Records released the album, "If You Can Believe Your Eyes and Ears," by The Mamas and Papas, showing the group in a bathtub with a toilet to the side. If the toilet is blocked off, the album is worth up to $25, but if the cover shows a full view of the toilet, it is worth ten times as much.

Where to Sell Your Vinyl Records

So, you have some vinyl records and want to sell them. Where should you go?

For a quick sale, a record-store dealer is your best option, but a dealer will generally pay no more than 30% of value.

If you have the time and patience, go directly to collectors on eBay and other internet auctions. You could post a photo of your record on Craigslist; record collectors are always checking there. For records worth $1,000 or more, you might try auction houses like Christie's or Heritage-Odyssey.

The value of any collectible, vinyl records included, is like a sticker on a used car. It's up to the buyer and seller to use their best negotiating skills.

In the final analysis, something is only worth what someone else is willing to pay. In economics, it's all about supply and demand and as time goes by, the supply of 1950s and 1960s vinyl diminishes but the demand remains and prices rise.

John Marshall, aka Mighty John, The Record Guy, is a 30-year radio veteran and long-time record collector. For more than a decade, he has been helping radio listeners determine the value of their records or the ones they find at yard sales. His website is MoneyMusic.com and his Mighty John's Record Appraisal Guide lists the values of over one million records by more than 75,000 recording artists.