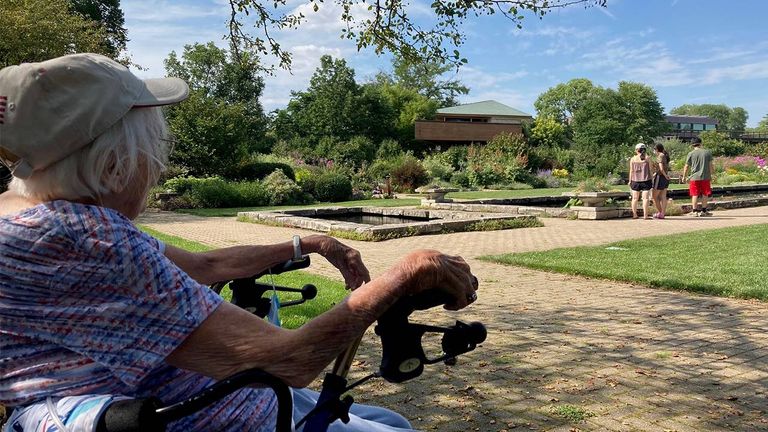 In Life’s Last Chapter, What Matters? A Room With a View

By Sarah White for Next Avenue

In E.M Forster's novel, "A Room with a View," an older woman and her young charge agreed on one thing: their stay in Florence would be untenable if they couldn't have the promised room with a view of the River Arno. The same need for a view of nature proved crucial when my 95-year-old mother moved from her golf-course-adjacent condominium in Sarasota to an assisted living facility near me in Madison, Wis. As it turns out, life without a view is practically a jail sentence for older adults.

Nature-Deficit Disorder is a term coined by journalist Richard Louv in 2005 to describe the relationship of children to the natural world today — a deficient relationship that is leading to a number of physical and emotional disorders. His term has gained enough traction to stimulate research, accessible through the Children & Nature Network Research Library.

Studies applying Louv's insights about children to older adults have found significant connections between time spent in nature and well-being. But I didn't discover that until my mother nearly died of Nature-Deficit Disorder.

When she first decided to leave her Florida home in late 2017, she asked me to look for a facility that was "like a national park lodge, not like a country club." Finding the right look was relatively easy — the Craftsman/Prairie style is popular in Wisconsin, and a reasonable match to that lodge look.

When my mother arrived here in the spring of 2018, she approved of the facility I found.

We spent the summer exploring the Wisconsin countryside and, unknowingly, kept Nature-Deficit Disorder at bay. But then winter arrived and we came indoors. The flaws of that facility became clear.

Interior courtyards were the only views available from the windows in its public spaces. These had few plantings, badly maintained. The one window in my mother's studio apartment faced a parallel wing of the building, separated only by a sidewalk. If you sat by the window and looked down this alley, you could see one struggling sapling.

"I can't see what season it is, much less what today's weather is like," my mother complained. We explored all the halls in that 150-unit facility, scoping out anywhere one could see a tree, an expanse of sky. We found one tree, surrounded by a parking lot. We found no sky.

As fall turned to winter, my mother stayed inside and her mood darkened. She broke an ankle in a fall on her 96th birthday. After that, her sadness and lethargy increased to the point that we met with hospice representatives. The end of her life seemed near.

Then I started looking for a different facility. Specifically, for a room with a view.

They tell you, as a caregiver-daughter, to look for a facility near where you live. "You'll be going there all the time. It has to be convenient," they say. "Ask about staff turnover. Ask about Medicare reimbursement, in case your elder outlives her assets." They don't say, "Look for access to nature."

My mother had always loved nature. It was she who got our whole family into camping. When she moved to Florida after my father died, she was ecstatic at getting to know a whole new biome. How could I have overlooked the importance of nature in choosing her last home?

This time, I made nature a priority. Soon I found a smaller facility — 62 units — laid out on a deep, but narrow lot, surrounded by a mix of evergreen and deciduous trees. A studio apartment was available with big windows that looked out on a particularly attractive maple tree, flanked by pines. My mother moved there in January 2019. Her outlook immediately began to improve. (Jean White is pictured at the very top, enjoying nature and people-watching at Olbrich Gardens in Madison during a visit in August 2020. Photo is courtesy of Sarah White.)

I began looking for research about Nature-Deficit Disorder in older people. Studies involving children dominated the search results, but I did find evidence to support my belief that older adults can experience nature deprivation as well. Dr. Charles Musselwhite's research suggests that for older people with limited mobility, a view out a window is beneficial. Even a mundane view helped if it included near and distant elements and human activity.

A 2018 nursing home study from a Norwegian nursing journal went further. Among the authors' findings: Regularly spending time outdoors improves older people's concentration and sleep. It provides multisensory links to the past, stimulating healthy reminiscing. It triggers an aesthetic response characterized by joy and positive feelings that block worry and negative thoughts. Those who spent time in nature reported having more meaningful conversations in those settings than they did while inside. They felt they were in better health.

The nursing home residents recognized that their relationship with the outdoors had changed. But nature's constant reminder of the cycles of life still cheered and comforted them.

The desire for connection with nature was top of mind when the architecture firm Potter Lawson was asked to design the Anderson Inpatient Unit for Agrace Hospice in Fitchburg, Wis., which opened in 2000.

"Studies show that connection to nature reduces stress hormones and all that goes with that," says Doug Hursh, a principal with Potter Lawson. "At end of life, that access is very important."

Many natural elements were used inside the Agrace Hospice building. Outside, a wheelchair-accessible path meanders through varied gardens past patient rooms where doors open onto patios with bird feeders and hanging plants in season.

While it would be wrong to suggest that every dying person's last wish is for a view of trees and sky, these reminders of natural cycles are a comfort to many.

"Nature has an inherent beauty that reflects the wonder and awe of creation itself, sculpted over the eons," says Jason Hill, a chaplain with Agrace Hospice. "For many people, this peace which surpasses our understanding of creation can help ease the mind, calm the spirit and lift our hope for what's to come."

Like the older chaperone in E.M. Forster's novel, my mother wanted very little — just a room with a view of nature. She was happy with her light-filled room and its view of trees, changing with the seasons.

Among the last things she said to me before she died in October 2020 was, "Sit in that sunshine and look at my tree — it's medicine."

Sarah White is a freelance writer and personal historian. She helps people write about their lives and work from her home base in Madison, Wis.