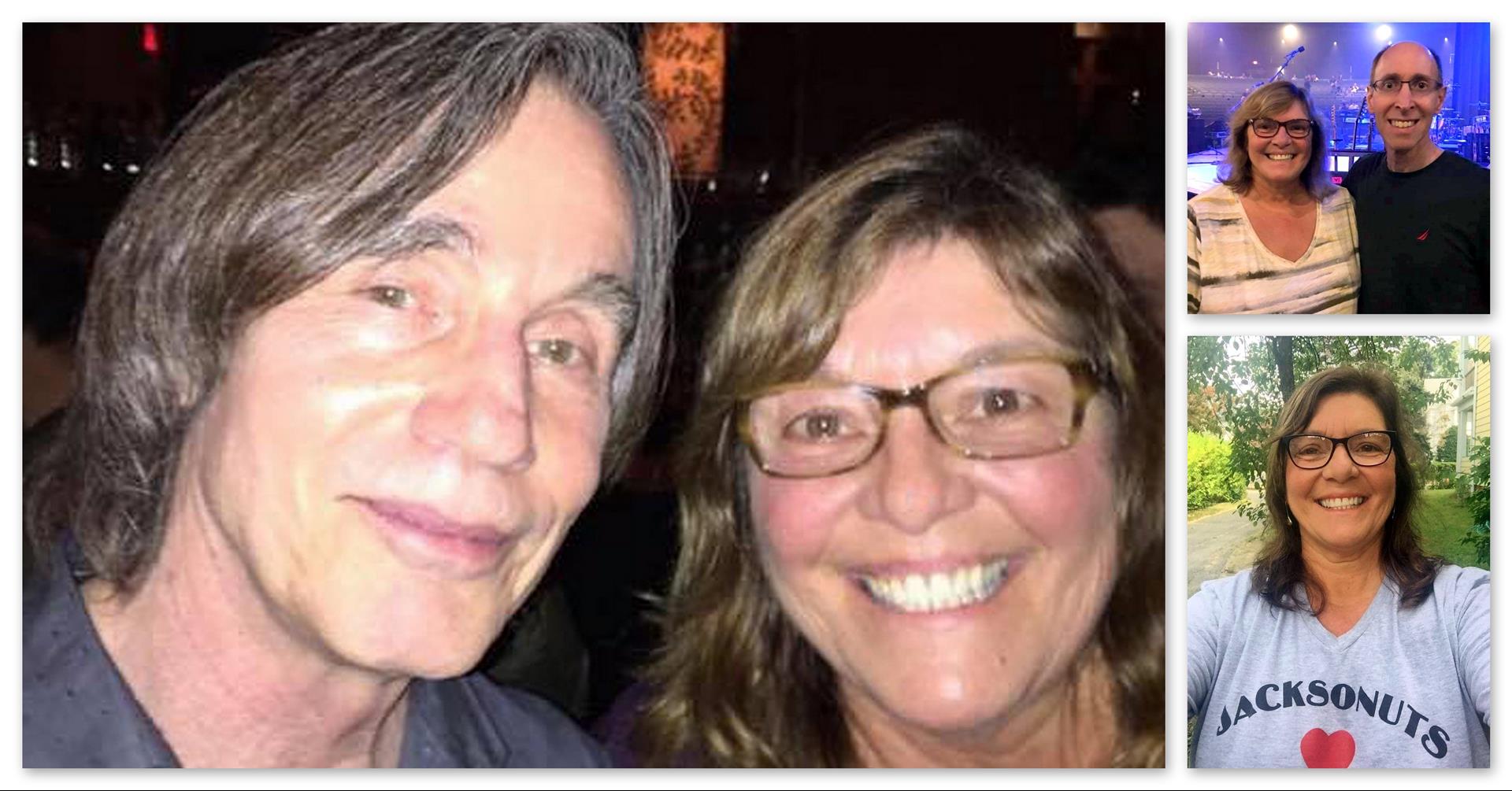 I Didn’t Know Her, But I Mourn Her

By Janet Siroto for Next Avenue

Like many people during this pandemic, I have been spending more (read: too damn much) time on social media. As the lockdown in New York stretched on, I found myself logging onto Facebook with renewed vigor, always scrolling to look for posts by my friend Alan Friedman, an attorney, married dad of two, and former neighbor in New York City.

Anyone who knows Alan knows he is an encyclopedia of guitar-centric rock and an avid concertgoer. If Fleetwood Mac, The Eagles, Mark Knopfler or Jackson Browne (especially Jackson Browne) are touring, Alan is there, expertly filming the concert’s highlights and posting them on social media.

I had fun watching some pre-coronavirus footage in his feed and reading the comments of his band of fellow music fanatics …until one day, the tenor changed.

On March 17, Alan posted a photo of himself with a friend — a woman with a joyful smile — and wrote: “My dear friend Joanne MacNeal Eldred, one of the most wonderful people I know, is very ill, hooked up to a ventilator in the ICU. She may have the coronavirus, but test results have not come back yet. Please send your thoughts and prayers for our sweet Joanne.”

This was my first one-degree-of-separation connection to a person hospitalized with coronavirus. Seeing the post take flight within the community of Jackson Browne fans was amazing. This Facebook tribe of “Jacksonuts,” as they call themselves, share concert info, favorite songs, inside jokes and general good cheer. Prayers were offered, emojis shared. New posts popped up lending support.

I found myself scanning Facebook daily, then a couple of times a day, to learn of Joanne’s status. I didn’t know Joanne, but I felt completely enmeshed in her struggle with the virus. I could be Joanne. Anyone could. A person in their early 60s, caught in the crosshairs of a pandemic. No one knew how she was exposed to the pathogen. My magical thinking about the virus being conquerable became inextricably bound to Joanne’s story.

Perhaps it was only fitting that her struggle with the virus would play out over social media; the platform played a powerful role in her life.

Joanne — an alcoholism counselor and concert venue worker in Northampton, Mass. — and Alan had bonded via a Facebook group called “For Everyman Jackson Browne Fan Group” six years ago. Soon thereafter, they had met in person, before a New York City Jackson Browne gig (true to form, Alan can tell you the name of the exact date and the name of the tour).

Alan had posted that if anyone wanted to meet IRL (In Real Life)  before the show, he’d be across the street from the venue, grabbing a bite. When he walked into the restaurant, there was a woman in a Jackson tee, with an incredible smile, waiting. It was Joanne, who’d just logged three hours behind the wheel to get to the show. (Alan soon learned that “power-driving anywhere to see her bands” was a Joanne signature.)

The two became concert pals, egging each other on to get Jackson tickets to any shows on the East Coast…and beyond. Joanne kept nudging Alan to get tickets to a performance in Red Rocks, Colo.; he snagged some for himself and his daughter but didn’t alert Joanne, just to see the delight on her face when he surprised her in the stands. Alan’s wife Alyson took to good-naturedly calling Joanne his “Jackson wife,” and Alan was known as one of Joanne’s “Jackson men” seen by her side in concert selfies.

A friendship bonus: Irrepressible Joanne had schooled Alan in the art of meeting the performers before and after shows.

“It was nothing that ever occurred to me before,” he says, “but she showed me how and motivated me. I had the most incredible experience meeting Jackson, who’d been a favorite singer-songwriter since I heard his very first album. He was so appreciative when I told him what his music meant to me; he signed three albums for me, too. And I have amazing photos with Jackson, all thanks to her encouragement.”

For weeks, I remained glued to Alan’s updates and the comments from Joanne’s community of friends. Even Jackson Browne’s guitarist, Val McCallum, whom Joanne had charmed over the years at meet-and-greets, chimed in. He videotaped and uploaded songs for her. Facebook became a lifeline for her circle under lockdown.

As the days passed, my attachment to Joanne grew. A decidedly non-religious person, I found myself saying prayers, as suggested by her Facebook clan, to bring her back to health.

I felt somewhat embarrassed by my lurking behavior, following the plight of a person I’d never met or with whom I’d even exchanged online messages. Was it too voyeuristic of me, I wondered?

I was reassured when I later spoke to R. Benyamin Cirlin, executive director of New York City’s Center for Loss and Renewal.

“Our ability to be empathic gives our lives richness and completeness. Novels have been around for ages, allowing the reader to get involved in someone else’s life and broadening one’s range of experience,” he explains. “That’s what social media does too. We can connect and care for each other online, which provides a sense of meaning and impact.”

As much as we may bash it, social media can be invaluable during challenging times. It bonds us and underscores our humanity.

“In social psychology, there is a concept called the ‘fallacy of uniqueness,’ meaning a person feels as if he or she is the only one experiencing, say, feelings of fear and uncertainty,” observes Cirlin. “Being part of a group affirms that it isn’t just you, and social media likewise does that. There’s deep comfort and calm in hearing that you’re not alone, that you are part of a larger human drama. It’s part of our evolutionary heritage, dating back to the times of cave art. We thrive on communication and connection.”

Finally, on March 29, Alan reported that Joanne’s eyes were open. Her jubilant friends figured out how to get an iPod filled with her favorite music playing by her side in the ICU. I “hearted” every post possible on Facebook as if every keystroke might bring her closer to a full recovery.

By March 31, she was off the ventilator. Joanne was soon Facetiming and laughing with friends.

Tragically, the situation didn’t stay sanguine. Still in the hospital, Joanne wasn’t getting enough oxygen. As the complications from COVID-19 intensified, she went back on the ventilator. Alan continued his updates and the Jacksonuts poured out their love —right up until April 21, when Joanne died at age 63.

Alan wrote, “Our dear friend Joanne is gone. She left surrounded by her children [Brandon and Patrice] and with all of our love. We are without words. Joanne was so loved by so many and will be greatly missed. Rest in peace, sweet girl. Let the music keep our spirits high.”

I was shaken by this stranger’s death. She didn’t seem like a stranger to me at all, to be honest. The posts about her and the flood of comments on Facebook had filled in the blanks. I felt assured of her warmth, her easy laugh, her enthusiasm — and was heartsick to think she was gone.

Social media had allowed me to follow her saga and see her. It had shown me her ferociously devoted friends, united by music and bonded by a beautiful camaraderie. And social media also gave these pals a way to channel their feelings into action.

On April 26, Alan and others launched a GoFundMe. “After getting a clearer picture of what her kids are facing,” he said, “I concluded that one way we can all help is to establish a fund to cover the cost of final arrangements, paying the mortgage and settling her affairs, and to provide financial and moral support to Joanne’s family.” The goal was set at $20,000.

Within days, almost the full amount flowed in, from her close friends, her music community — and from strangers like me, who’d read of her plight and wanted to do what they could to assuage her children’s suffering and honor her.

Sharing the successful fund-raising news, Alan wrote, “Your love and generosity are a testament to the life and openhearted spirit of Joanne, and how much all of our lives have been enriched just by having her in them.”

As strange as it may sound, I feel lucky to have “known” Joanne. Yes, it was from afar, filtered, via Facebook. But I became acquainted with a unique and wonderful person and mourn her loss.

Janet Siroto is an NYC-based journalist and content strategist who specializes in lifestyle, wellness and consumer-trend topics, as well as personal essays.