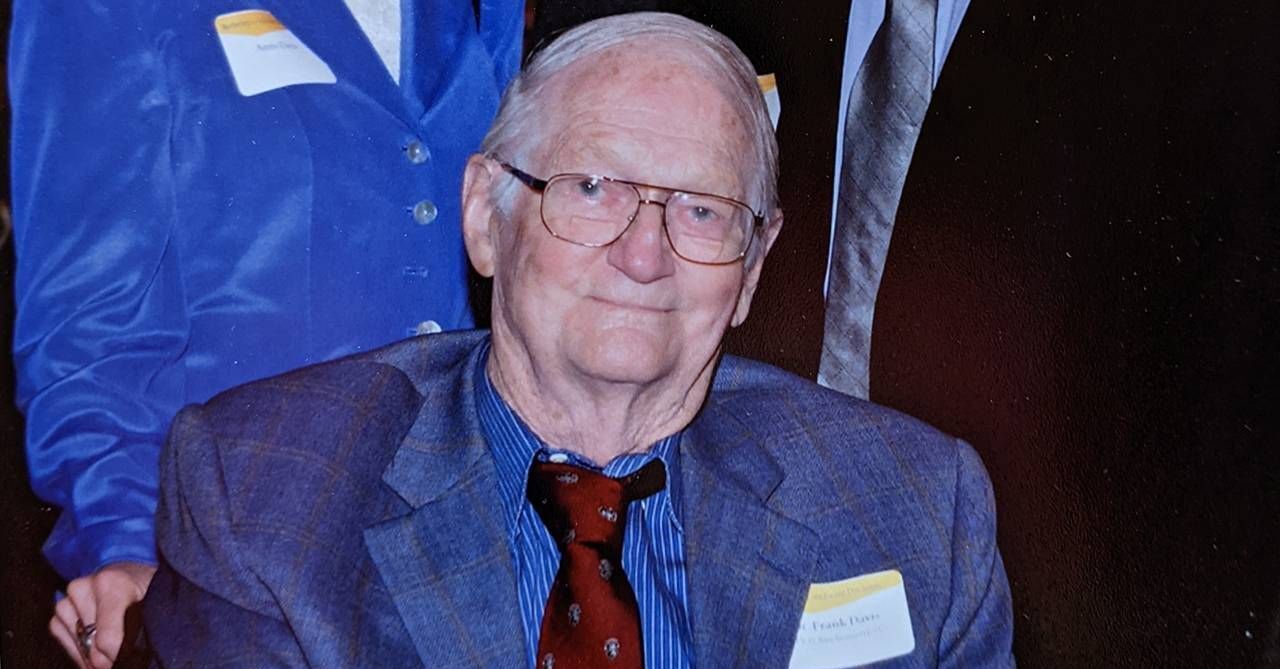 From Smallpox to COVID-19: A Centenarian's View

By Frank F. Davis for Next Avenue

Editor’s note: Next Avenue is very sorry to report that Frank Davis died May 19, 2021 following treatment for pneumonia. He wrote this article recently with the help of his daughter, Ann Leslie Davis. She told Next Avenue that her father would have loved to get his message out, even if he was no longer here to see it published. Frank Davis is pictured above after winning the CAL Alumnus of the Year Award in 2013.  |  Credit: University of California, Berkeley

In 1925, when my brother and I were little boys, my mother hitched our horses, Tom and Jerry, to a wagon and drove us into town for the smallpox vaccine. We ranched on the Umatilla irrigation project outside Hermiston, Ore., and the dusty, bumpy ride took a good hour. But my farm girl mother knew it was worth it. The deadly disease still roamed the West and numbers had crept up in recent years.

As we gritted our teeth, the doctor dipped a two-pronged needle into a bottle of live vaccinia virus (the mild-mannered cousin of smallpox), then jabbed our arms a few times to make sure it went in. We howled, but then it was over. Mother brought us back outside and we all rode home to the ranch.

How different in late March of this year, when a nurse drove out to my Bay Area home.

As I sat in the comfort of my recliner, she checked my temperature, pulse and blood pressure, then rolled up my sleeve for the one-shot Johnson & Johnson COVID-19 vaccine.

"Are you ready for this?" she asked gently, as if I were still that nervous five-year-old kid. "Fire away," I replied.

And in a painless few seconds, with my children there to celebrate, I received protection against our new, 21st century scourge.

Vaccines may seem odd bookends to a life, but to me they are somehow fitting. I have spent a career in science, and had the good fortune to participate in the juggernaut of medical progress that defined the 20th century. Much of that progress has involved vaccines.

A child could die of many things in 1900. Measles, polio, pneumonia, whooping cough, tetanus, smallpox, diphtheria, tuberculosis, the flu.  One in 10 infants in America died before they reached their first birthday. Vaccines helped change that.

Over the course of the 20th century, scientists discovered the cause and developed a vaccine for each of those diseases. By the year 2000, infant mortality had dropped more than 90%, from 1 in 10 to less than 1 in 100.

Vaccines themselves have also evolved over the last century. From the simple smallpox formulation of my childhood, they have become sophisticated preparations that are safer and work more efficiently at protecting us from disease.

The ultimate purpose of a vaccine is not to become more complex, however. It is to become obsolete.

Arguably the greatest medical achievement of the 20th century is the eradication of smallpox. Little children are not jabbed repeatedly with two-pronged needles anymore, because there is no longer a need.

After a massive global immunization campaign, the ghastly disease that killed 3 out of 10 and left many survivors disfigured for life was wiped off the face of the earth. Smallpox was officially declared eradicated in 1980.

When the world is immunized, a virus has nowhere to live. It dies for lack of a human home.

Smallpox, a scourge of humanity since the Pharaohs, is estimated to have killed roughly 300 million people worldwide during the 20th century. Though the coronavirus has a lower mortality rate, it has killed an estimated 3.4 million people in a year and a half.

Wouldn't it be an astonishing feat if one day we could wipe out COVID-19 too?

We can surely start by vaccinating everyone who wants or needs a vaccine and by focusing on the hard to reach.

At 100, I am unable to leave my home. I received the COVID-19 vaccine by a fluke, during the brief window when health workers began visiting homes with the newly approved Johnson & Johnson vaccine. There are at least 2 million Americans like me.

A one-shot vaccine is ideally suited for those who have trouble leaving home or getting to a faraway vaccine clinic. Its renewed availability greatly increases the chance of containing the coronavirus and protecting the most vulnerable.

As a little boy, I wouldn't have believed it possible that smallpox could be wiped out. But sometimes the impossible happens. It is my greatest wish that the coronavirus meets the same fate as smallpox someday.

Now that I am vaccinated, I will have a better chance to make that wish when I blow out the candles on my 101st birthday this July.

Frank F. Davis is a former professor of biochemistry at Rutgers University and founder of Enzon, a biopharmaceutical company. In 1970 he invented PEGylation, one of the world’s leading drug delivery system, which is used in the Pfizer and Moderna COVID-19 vaccines. His daughter, Ann Leslie Davis, is an award-winning freelance journalist and member of the National Association of Science Writers. She is writing a non-technical book on drug delivery systems.

Posted on
June 16, 2021
by
filled under
Aging Well
Nostalgia
Health
Healthcare
« Back to Blog