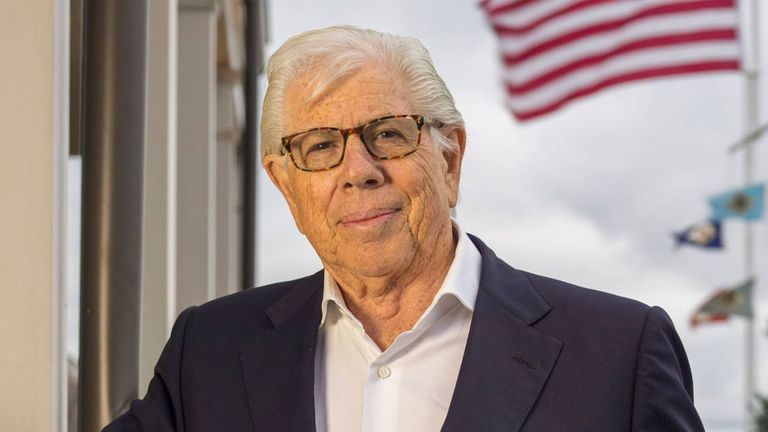 By Sandra Ebejer for Next Avenue

For many, Carl Bernstein's name conjures thoughts of Watergate. The journalist was just 28 in 1972 when he and fellow journalist Bob Woodward broke the story that ultimately led to the resignation of President Richard Nixon. The duo's work won a Pulitzer Prize for The Washington Post and solidified Bernstein's reputation as one of the most impactful and respected investigative journalists of a generation.

In his latest memoir, "Chasing History: A Kid in the Newsroom," Bernstein takes readers back to where it all began: The Washington Star. It's where he, as a 16-year-old self-described "scamp," gained hands-on reporting experience while struggling through high school.

For five years, The Star (no longer in existence) gave Bernstein a front-row seat to some of the most incredible moments in history; among them, the inauguration, presidency and assassination of President John F. Kennedy, the 1963 March on Washington and Yuri Gagarin's trip to space.

But the book is so much more than just a retelling of moments in time. It is Bernstein's love letter to journalism and the power of the printed word. It is a portrait of a young man who, despite a declining grade point average, found his life's calling in the noisy, frenzied world of the newsroom. And it is an ode to the friends and colleagues he met during those five formative years — many of whom he's still close with today.

Bernstein spoke over the phone with Next Avenue about this period of his life, how he views the current media landscape and his ongoing pursuit of "the best obtainable version of the truth."

The following interview has been edited for clarity and length.

Next Avenue: Why did you decide now to write about this phase of your life?

Carl Bernstein: The book is a memoir of my five years at this incredible newspaper at a time in my life when I was, to put it mildly, directionless. I got the greatest seat in the country at age sixteen, at the most interesting and pivotal moment of our era.

And there's my enormous gratitude for the people I worked with and what they taught me and what I learned there, because virtually everything I know about journalism and reporting comes from that incredible experience and those incredible people.

I've always wanted to go back there, not [to] write a book about the old man looking back, but rather to revisit it and tell the story through the voice and eyes of this kid like he experienced it.

In some ways, I think it also is a book about today. There's the famous 'two-source rule' that Bob [Woodward] and I had during Watergate; you see the origins of it in this book. So there's a continuum, even though it's about those five years. It points toward much more and explores much more.

You were not the best student, to say the least. But then you joined the staff of this paper and it's like a switch was flipped. What do you think it was that caused that to happen?

That I loved it. That I recognized its importance to me, as well as the importance of what reporting and a great newspaper is. And the excitement of it.

I went [to The Star] while Kennedy was running for president against Nixon. I was there for, and got to cover, his inauguration. What I got very quickly was the dedication of the people who worked at this newspaper to the truth, the best obtainable version of the truth, which is a phrase Bob [Woodward] and I came to use and again has its origins at this period at The Star.

The other thing that the book shows, I hope, is that the truth is not neutral. There's been a myth about 'objectivity' in reporting and journalism, as if the idea is to split it down the middle. The job of reporting is about context, it's about writing what is true.

I've always used the example of, if a bank robber goes into a bank and there's a video camera of him, including his face, with a gun, and an audio recording of him demanding money and it's handed over and he's arrested, and his lawyer said he was in the next county, this notion of 'objectivity,' or split it down the middle, is nonsense. Nine-tenths of the story ought to be about what's on the tape, because it's there. It's demonstrably true.

What you see this kid [in 'Chasing History'] learning is what reporting is about as well as having the time of his life. It's electrifying. And to see and know that people all over the city, the capital of the United States, are reading what you've written, it conveys a kind of awe and awesome responsibility along with the fun.

There's a great moment in the book where your first piece is published and you sit in the cafeteria reading it over and over. Do you still get the same level of joy from the work?

I do. I do. And the Trump presidency is a good example of it. I wouldn't use the word joy because of the horror of what the presidency was, but a kind of satisfaction.

There's real joy in learning, uncovering, putting the information together, and seeing what it means. That's a joyful process. And it's the same process as what I did in those years.

You write in the book that TV had the ability to do things that newspapers could not do, while newspapers had the power of the written word. Now that so many get their news from social media or the internet, what are your thoughts on media today?

If you look at what's going on in this country in terms of a larger culture, not just politics and not just media and reporting within it, there's been a momentous cultural shift — much of it embraced unbelievably enough by one of the two political parties — in which disinformation, misinformation, lies, authoritarianism, voter suppression [is supported]. And all of this is reportorially accurate, what I'm saying. It's not an opinion.

I think that the best obtainable version of the truth is gettable and applicable across the media spectrum. Social media, which has a different purpose and is often a scourge in terms of undermining and being antithetical to truth, is now a huge element of this larger culture that I'm talking about.

This magnified and amplified means of untruth is a far different equation than in 1960. Whatever the shortcomings of our newspapers [and] our broadcast networks at the time, there was not at the same time overwhelming it a culture of untruth. There was a recognition between propaganda and reporting.

And incidentally, Trump did not bring about this culture. We've had a cold civil war in this country for thirty to thirty-five years. Trump ignited it.

One of the things that started to happen, particularly with [newspaper tabloid and Fox TV's Rupert] Murdoch culture in the eighties, was more and more people started looking not for the truth in their reason for consuming media, but rather looking for information to reinforce what they already believed. And that's not a partisan distinction.

That, too, is a big difference from the era that I was at The Star. I think the overwhelming number of people who read their newspaper in that period were looking for a way of accessing what was really going on in their cities, in their country and the world, from journalistic institutions that they trusted to bring in a truthful account. It's a very different environment [today].

Do you think it's possible to get back to that level of trust and truthfulness?

There's plenty of great reporting out there, but the larger culture is not necessarily hospitable to it. In fact, it's antagonistic to it, in terms of this divided country that we have.

I mean, could some great event pull us together in some way? I suppose it's possible. But certainly not now. So to think that somehow there is going to be a transformational media landscape different from what we're seeing, and have seen? No.

You don't go into much detail in this book about your home life, though you say at one point that you were more comfortable in the newsroom than you'd ever been at home. Can you share a bit about what your family was like? Were your parents proud of the work you were doing at The Star?

I wrote a memoir ['Loyalties'] in the mid-eighties about my growing up in a left-wing family during the worst witch hunts of the Cold War and how it affected my family and how it affected me to some extent. I didn't want to go there in this book because this book is really about what was going on in my life at the time, which was at the newspaper, not in my family's house.

In fact, I was out of that house at seventeen. I have enormous love and regard for my parents and what I learned from them and their struggle. And yeah, they were proud of what I did at The Star, and later as well. But the earlier book covers that ground.

This is a book that is really meant to be about this kid in the newsroom. He lives in a house with four other reporters who are older than he is and his world is imbibing this spirited, amazing, frenetic, stunning profession. These people became my family. They saw something in me that I hadn't seen in myself.

Your name will always be associated with Watergate. But when you look back at your career, what are you most proud of?

I like the idea that when I look at the work, there's a line that runs through it. It is partly about the abuse of power and democracy and people's struggle to be recognized for their humanity and [those] who would deny them that — whether it's about the fall of communism and the role of John Paul II or Nixon's attempt to undermine the very basis of our democracy, which is to say free elections, as well as his wars against the press, against the judiciary, against the law, against justice. I think that a lot of the work has that resonance.

But part of it is about the fun of it, and I think that that's what this book is about. The sheer joy of it and how that carries over, sixty years later.

Sandra Ebejer lives in upstate New York with her husband, son, and two cats who haven't figured out how to get along. Her work has been published in The Washington Post, The Boston Globe, Real Simple, Writer's Digest, Shondaland, and others.