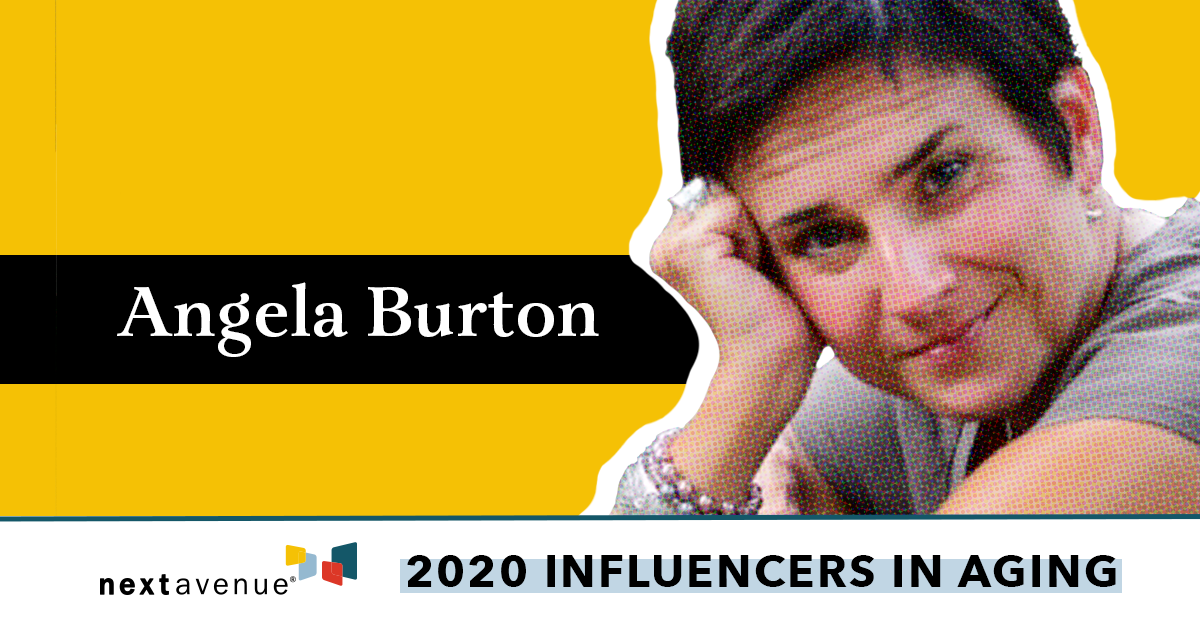 Motivating older adults to write their own stories is so important to Angela Burton that it's literally part of her job description: Founder & Chief Writing Motivator of Feet to the Fire Writers' Workshops (FTTF), "a creative program that inspires older adults to challenge themselves through expressive writing."

In 2014, Burton, 56, a writer and teacher of more than 20 years, who lives in Louisville, Ky., launched FTTF by offering writing workshops in local assisted living facilities. Before long, Burton had worked with more than 600 older adults. Seeing the program grow in popularity, she began training facilitators in congregate living homes outside the Louisville area so Feet to the Fire could be made available in more locations.

Since 2018, FTTF has been offered nationally and is now in seven states – Burton also just launched a version especially created for consumers (more on that later).

The advent of COVID-19 also compelled Burton to act quickly to "keep the voices alive" of those program participants in senior living communities as small-group activities were quickly prohibited. The new podcast, Feet to the Fire Writers' Workshops OUTLOUD, features interviews with, and stories read by, the older writers themselves. Currently the podcast is being listened to in the U.S., Canada, the U.K., Ireland and India.

Next Avenue: I know you were inspired by your late father, Joe Kirtley, to launch Feet to the Fire Writers' Workshops because he was a storyteller who began writing vigorously after he retired. Is there a story of his that is a particular favorite of yours?

Angela Burton: If you knew how many stories this man wrote! Daddy was in the Navy for a brief time during World War II. He didn't go overseas – I think the farthest he got was Rhode Island – but he was eighteen and it was the first Christmas he wouldn't be home. My dad grew up very Catholic, he was an altar boy. That Christmas, he was really homesick. He went to a Catholic church to find some solace, and he came upon this German man, an immigrant, and my daddy had an epiphany: "This man is supposed to be my enemy, but I feel a complete connection to him. Neither one of us is home where we want to be."

He used to tell us that story when we were growing up, but then he wrote it down, and he would always well up with tears when he told it. That story moved him for the rest of his life.

One of the vital messages of Feet to the Fire is the importance of older adults finding purpose writing their stories. How does this happen, and why is it so critical?

In a number of ways. I don't care how old people are, if a teacher or facilitator gives them something to accomplish, they will typically rise to the occasion and really try to meet that goal.

Whether they're in congregate living or living alone at home, or even living with other people at home, having something to complete and finish and do is important, whether it be writing or artwork or quilting or music or anything that [makes them] feel like they've accomplished something. That's good.

If you give people something to look forward to and something to get up out of bed for every day, I think that is at the heart of purpose. When we don't have those things, our purpose starts to go down and then we [might start thinking] 'What's the point?'

What is it about writing in particular that gives older adults agency?

I think that it's really important that we all have agency over our own lives. If we're going to tell our stories, we have to be the author of those stories. I believe that with my whole heart.

You can interview me and I can interview somebody and I can tell their story and you can tell my story. But when somebody puts pen to paper or puts their fingers on the keyboard, they are in charge and they are in charge of what they say, how they say it, the narrative that they present because it's through their lens. That is so important for authenticity. They have that control.

When you're getting older, you're losing more and more control of things like your health, your independence and so forth. Anything we can give ourselves as we get older to keep control of our own lives and our own narrative — I think that's really important.

We've talked in the past about how so many people think they don't have an interesting story to tell or that they could never write something themselves. What is about writing their story that can be intimidating for some people?

That's something we hear at Feet to the Fire all the time: 'I'm not a writer.' They have this notion of writer in their head, and that means published, and that means New York Times bestseller. One of the first things we try to help them understand is that writing is just a very cool process. And everybody can do it. It's a process like exercise, or meditation, or yoga, or cooking.

I always encourage people to just take it one sentence at a time. Often they will say to me, 'That thing practically wrote itself.' And I say, 'That's how it goes.' (laughs)

Despite the pandemic, Feet to the Fire has continued virtually. How have you adapted the program so participants can still write and share their stories?

In the early days of the pandemic, when assisted living residents were basically quarantined to their rooms, it became a challenge to continue life engagement activities and programs like ours. Earlier this year, we were already growing pretty quickly and I wasn't sure how everything would work. But it is working.

We train a facilitator from among staff members at senior living communities. The groups are just run a little bit differently. Some places offer it in a socially distant way – people still gather to read their stories, but they sit apart from each other and the facilitator sanitizes a microphone after each use and passes it around. Other places are having people read their stories on Zoom. The writing piece hasn't changed; they are still doing that on their own.

As we know, loneliness and isolation are on the rise due to the limitations of the pandemic. Do you worry about how older adults will cope as time goes on?

This silent generation is very stoic, for the most part. They'll say they will make the best of it. But deep down in our hearts, whether we're ninety or forty, it's disheartening. It's lonesome. I often hear 'I miss human touch, I miss seeing friends, I miss being physically with my friends and family.' And I think that's true for most of us.

For older adults, I think it's worse because many are more frail, they may have underlying health issues. So, their physical well-being is affected. They are less robust. Loneliness and isolation can make you sick. And as research shows, if it weakens your immune system, that can make things worse.

There was an article I read about the pandemic that just punched me in the gut. It basically said that because we're in such unknown territory with COVID-19, people in their eighties, nineties and up are likely going to spend their final years in a type of lockdown situation. And that's heartbreaking.

You were also inspired creatively during the pandemic. Tell us about the latest version of Feet to the Fire.

I thought – I've got to get to these people. The idea of a consumer version of Feet to the Fire was always in my head, but I knew I had to do it now.

So I created these cool writing kits, and I'm excited because they are available on the website now. People can buy a kit for themselves, or give one to their parents or to a friend. It's just a way for us to get people writing.

I wanted these kits to be appealing. To be fun. The kit itself is the size of a personal pan pizza box (laughs). The story of my dad is on the inside front cover, along with the story on why Feet to the Fire was founded.

There's a branded blank journal, and on the bottom cover, it reads: But I'm Not a Writer. That's what my dad used to say. And there's a pen, with a stylus. People love the pens. We favor writing by hand because we know it helps your brain — that's based on research.

And then there is a ring of cards with two hundred writing prompts, four per card, called sparks, similar to what we use in the FTTF workshops. It's like a little flip chart where they can go through and find ideas they like. There are just words, phrases, anything to get people started thinking. Everyone works at their own pace.

I made the directions very easy to follow. And they can choose a prompt from a card, or just think of their own. There are no rules. The point is to write, write, write, write for a good twenty minutes, fill two pages. Whichever works until you run out of steam, close the journal, smile, repeat the next day.

And once they have the kit, they are invited to participate in small, subscription-based online groups. Not big Zoom groups where everyone feels lost, but smaller groups, with a facilitator, where they can make friends and share their stories. It's like having a club. It's about belonging.

What would you say to someone who wants to start writing but doesn't know where to begin?

It's so good to try new things that you've never done before, especially as we get older. And what's the worst that could happen? If you don't enjoy it, then you go on to something else.

But what's the best that could happen? You wind up enjoying the process of writing so much that it becomes something you do every day, the thing you count on, the thing that calms you.

Writing has gotten me through some of the most tough times of my life. And I can't imagine not having that outlet. It belongs to me. I don't need anyone's permission to do it. I can just do it.

All it really takes is a desire to try.

Julie Pfitzinger is the editor for Next Avenue’s lifestyle coverage across the Living and Technology channels. Her journalism career has included feature writing for the Star-Tribune, as well as several local parenting and lifestyle publications, all in the Twin Cities area. Julie also served as managing editor for nine local community lifestyle magazines. She joined Next Avenue in October 2017.