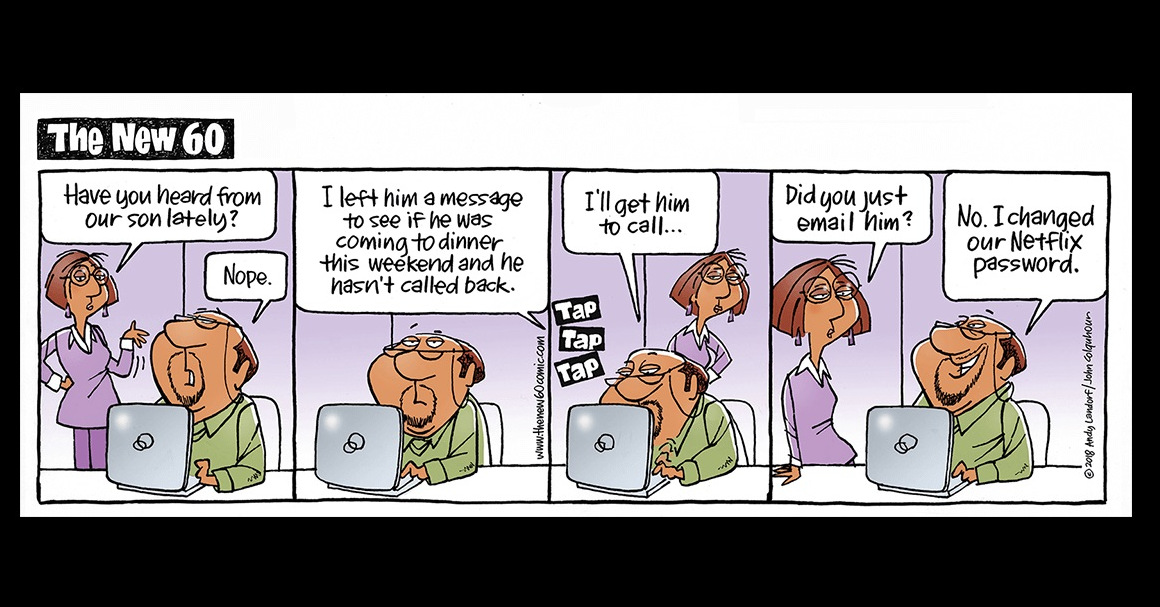 By Greg Daugherty for Next Avenue

Life after 60 may not be all laughs. But it’s proving to be fertile territory for the wit and insights of Andy Landorf and John Colquhoun, the funny creators of The New 60, a twice-a-week comic strip now in its second year.

The strip centers on four 60-something pals, who often gather at their local diner to share stories, commiserate and poke fun at each other. The diner’s waitress, also in their age group, is a recurring character, as are an assortment of family members and innocent bystanders. Readers often see the strip kidding about marriages in midlife, technology, money, work, health, social media, Social Security, aging and the boomer generation’s millennial kids.

The New 60 is loosely based on the daily lives and foibles of the former ad industry vets, Landorf, 66, and Colquhoun, 60. It’s available on their website, as well as on Facebook, Instagram and Twitter, and several print weeklies in Westchester County, N.Y., which Landorf calls home.

Next Avenue recently asked Landorf and Colquhoun how The New 60 came about, where they see it headed and what they’ve learned about self-reinvention along the way.

Next Avenue: How did your collaboration begin?

Landorf: We both worked for the same advertising agency. Then it merged with a bigger agency and heads started to roll. As John used to say about the Vikings: they would take their elderly, put them on a boat and set the boat on fire and that’s how they got rid of their aging population. But we jumped off and swam back to shore.

And what was the genesis of ‘The New 60’ strip?

Landorf: I had this thought: What about making a comic about people in our age group? I called John with great trepidation, thinking he’d say, what a terrible idea. But he liked it. Go ahead, John, you take over.

Colquhoun: Yeah, at the time, it wasn’t much more than ‘Hey, would you like to do a cartoon strip?’ and I thought, ‘Oh, that’s an interesting idea.’ So I said, ‘Why don’t we get together and talk about the characters, think up a back story for them, see where the story line’s going and whether we can come up with enough material?’

Landorf: When I called him with the idea, his response was — talking about me to me —‘And I thought his best ideas were behind him!’

Colquhoun: It was a joke.

You introduced the strip on Facebook. Why was that?

Colquhoun: We started there because even though the kids were abandoning Facebook, it was where people our age were going and keeping in touch. Then we built a website that has some other info and background on the characters. We also started a blog that mostly Andy’s in charge of, since I’m in charge of the artwork.

Landorf: But it’s not like I write it and John draws it. He writes and draws, and I write. I have zero ability to draw and John has a good ability to write.

Colquhoun: I keep threatening Andy that one week we’re going to have him do the drawings.

Landorf: You know what that comic would be like — stick figures.

What’s been your goal for the strip?

Landorf: I think in general we’re trying to look at the universality of what it means to be at this stage of life — what’s alike about all of us, as opposed to what’s different.

You know, for instance, a topic like: Should I kick my kids off the phone plan? No matter what side of that you’re on, it’s something we’ve all thought about. We did a comic on that and it really resonated. That’s what we’re striving for, to get those moments.

So you often draw on your own everyday experiences?

Colquhoun: We did one that came right out of a dinner I had with some friends. It was a dark restaurant, the menu was in small type and only one of us had their reading glasses with them. So, everybody was taking turns reading the menu and then passing around the reading glasses. I was telling Andy about this, and he said, ‘It’s like when we were younger and passing a joint.’ So we turned that into a ‘then and now’ cartoon with the younger versions of our characters in tie-dye shirts and ponytails passing a joint and now they’re passing the reading glasses.

Are there topics you avoid because they’re too downbeat, for example?

Colquhoun: There are definitely ideas we’ve come up with where we’ve said: ‘You know, that’s too old, that sounds like somebody who’s 80.’

Landorf: Like backing the car down the driveway just to pick up the newspaper. That’s too old. But your knee hurting in the middle of a bike ride? That’s just about right.

Colquhoun: So it’s not all ‘Gee, we’re getting old, our bodies don’t work like they used to.’ We wanted it to be more upbeat about the possibilities, what you can do now that the kids are out of the house and you have some time and you can travel.

Or you’re reaching the end of one career and possibly starting another. We had one of our characters looking into a new franchise we invented called Pizza on a Stick.

Do you have any other taboos — topics you won’t go near?

Colquhoun: Despite how desperately Andy wanted to talk politics, I managed to talk him out of it. The world is so polarized now, you never know even among your close friends where their political alliances lie.

Landorf: It’s like whatever audience we’re trying to build we’re going to lose forty percent of them right off the bat. If people know you lean one way and they lean the other way, they’re gone.

Colquhoun: But we have considered doing a cartoon about the fact that you can’t talk about politics anymore. You go to a dinner party and you don’t know everybody well enough to broach the topic. Or you go to Thanksgiving with family members you don’t see that often. The awkwardness of that is kind of funny.

Are you making money with the strip, or is that even a goal?

Landorf: Maybe our goal initially was to make our friends laugh, but that was never all of it. You know, it’s a lot of work, a lot of thinking, a lot of editing, a lot of drawing on John’s part, posting in the various social media.

Right now, we are attempting to be syndicated, so we’ve got sheets out to various syndicators. We hope someday an HBO or a Netflix or a Showtime will pick us up and say ‘That would make a great animated series.’ Could it be a YouTube channel? There are so many places that this could go.

Colquhoun: Yes, we definitely would like to make money, and we have some short-term ways we’d like to monetize this — like a book collection of the comics so far.

At this point in our careers we don’t have to make Charles Schulz money, but if it finds an audience and takes off, all the better.

What advice would you have for others in their sixties who might want to reinvent themselves or pursue a passion, as you have?

Landorf: We all have passions, right? For some people it might be growing a fantastic vegetable garden. Somebody else might want to do a sports podcast or take up painting.

Colquhoun: What the internet and social media allow you to do is take that passion… If you’re a great cook, you can have a cooking website. Or if you’re a gardener with a particular area of expertise, you can connect with people who love what you do.

Landorf: It’s easier than ever now for somebody to start their own thing or pursue a business idea, whatever that might be. So, if you have a passion you want to explore, I say go for it.

Greg Daugherty is a freelance writer specializing in personal finance and retirement who has written frequently for Next Avenue. He was formerly Editor-in-Chief at Reader's Digest New Choices and Senior Editor at Money magazine.