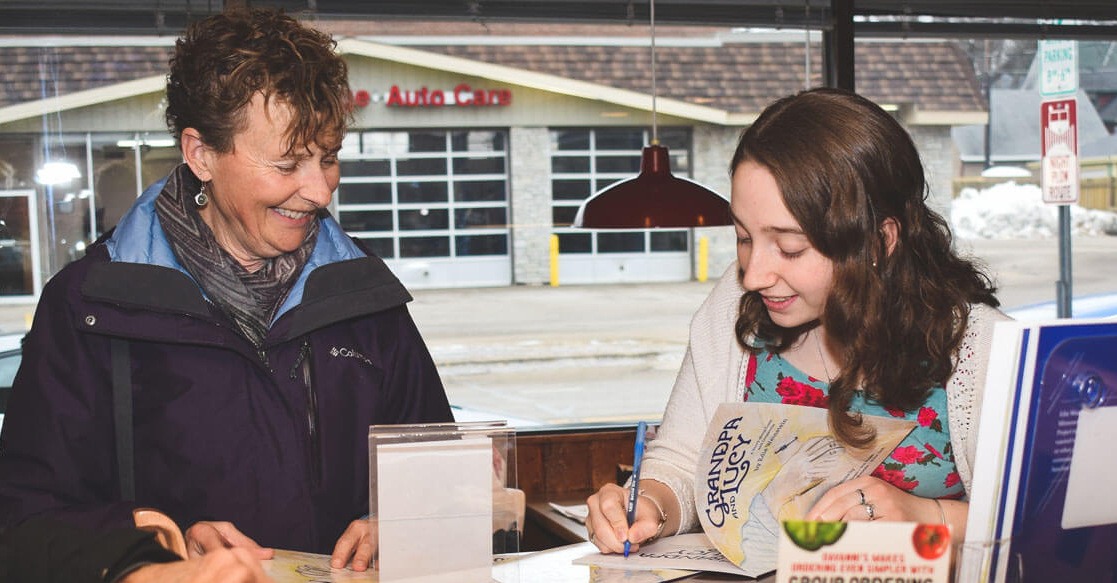 The subtitle for Grandpa and Lucy, a book by 16-year-old author Edie Weinstein, says it all: A Story About Love and Dementia. In this charming picture book, the main character, a young girl named Lucy, employs simple and loving gestures to strengthen the bond she has with her grandfather as signs of his Alzheimer’s disease begin to affect their close relationship.

Weinstein, who lives in St. Paul, Minn. and is a sophomore at Visitation High School, wrote the book for a Girl Scout Silver Award project during the summer after her eighth-grade year, following her participation in a Dementia Friends USA training session.

The Dementia Friends USA program was originally launched by the Alzheimer’s Society of the United Kingdom, and is part of a global initiative to raise awareness about dementia and to empower those who participate in the training (either in person, as Weinstein did, or online) to take action in the community in large or small ways.

According to Meredith Hanley, director for Community Capacity Building with the National Association of Area Agencies on Aging, and manager of the Dementia Friends USA program, teens become Dementia Friends for many reasons.

“Certainly some have a personal experience; others are connected with the programs as the result of an event at their school,” said Hanley.

The Dementia Friends program highlights five key messages, all of which Weinstein includes in her book: dementia is not a normal part of aging; dementia is caused by diseases of the brain; dementia is not just about having memory problems; it is possible to have a good quality of life with dementia and there’s more to a person than the dementia.

Although Weinstein has not experienced dementia in her own family, she said a close relationship with her late grandfather is what led her to base the story on the love between a granddaughter and grandfather.

“When I started to write the book, I spent time thinking about what a day would look like for someone who has dementia,” said Weinstein, who wrote the book at her kitchen table. “I came up with the idea about the situation (a wrong time for a movie, unexpected anger from Grandpa toward Lucy and Grandpa calling Lucy by her mother’s name) and wanted to show how a young person could work their way through it, even though at first they are very upset.”

An example that Lucy’s mother uses in the story to illustrate the thought process of the girl’s grandfather is based on a lesson about a bookshelf that Weinstein learned in Dementia Friends training.

Weinstein writes: “Think of it this way. Grandpa’s brain is like a bookshelf. All the old memories, like his army memories and his childhood memories, are at the bottom, and the new ones, like what time the movie is or what he had for breakfast today, are at the top.” The narrative goes on to explain that if the bookshelf gets shaken, the ones at the top will easily fall, but the ones such as the old stories are more ingrained and more stable, so they will stay on the shelf.

From there, the story shifts to another visit where Lucy brings an old photo album to show her grandfather, leading him to share fond recollections about his childhood, and a Frank Sinatra CD, which results in an impromptu dance session. Both of these offer simple ways for the pair to connect and enjoy their time together.

When it came to illustrating her story, Weinstein took a unique approach. Saying, “I’ve always been a writer, but I’m not much of an artist,” she gathered six of her talented grade-school friends, young women and men, and asked them to help her create the pictures.

“We all got together and planned out the specific looks we wanted for each character — what Lucy would be wearing, what Grandpa’s style would be — and then everyone would sketch a page,” Weinstein explained. “It was so wonderful to work with all of them and I was grateful for their help.”

The teens would meet at a local restaurant to compare images as they came up with the final illustrations. The collaborative task, led by Weinstein, was an additional component needed for the Girl Scout award. All of the young artists are listed on the book cover as contributors.

Meghan Constantini, coordinator for the St. Paul Neighborhoods ACT on Alzheimer’s organization, says that Weinstein’s book is making an impact.

“Edie took what she learned after becoming a Dementia Friend and translated it into a beautiful story,” said Constantini, adding the book has been shared by Weinstein in groups of people with dementia whose faces “light up” when they hear Grandpa and Lucy.

According to Constantini, the format of a picture book also provides a perfect opportunity to introduce the topic of dementia and Alzheimer’s to children. Dementia Friends Minnesota recently created a 35-minute curriculum for students in grades 2-6 based on Grandpa and Lucy.

“Edie is so genuine. There’s something so special about her,” said Constantini, citing what she calls the teen’s “caring heart” when it comes to others, particularly those affected by dementia. (Part of the proceeds from the sale of Grandpa and Lucy will go towards supporting Alzheimer’s education and outreach programs.)

Grateful for the Response

The positive feedback Weinstein has received for her book has been gratifying, she said. “The stories on how it has helped people connect to a grandparent have been so meaningful,” noted Weinstein.

Plans call for a Spanish version of the book, and a local youth performance group has expressed interest in bringing Grandpa and Lucy to the stage. Weinstein has also spoken at local events about her book, was featured on Minnesota Public Radio and participated in several book signings.

However, there’s a particular aspect of the success of her book that has been a nice surprise for Weinstein, who hopes to one day combine her love for writing and music (she plays several instruments, including the piano, violin and flute) into a career.

“Grandpa and Lucy is available in seven library systems in the Twin Cities, and every once in a while I’ll check and see that it’s on a waiting list,” she said. “I think that’s kind of cool because I’ve been on so many library waiting lists in my life!”

Julie Pfitzinger has worked as a writer and editor for more than 20 years; most recently she was a managing editor for the community lifestyle magazine group at Tiger Oak Media in Minneapolis, where she also served as editor of Saint Paul Magazine.